Guust Flater, or Gaston Lagaffe in the original French, is probably the most popular anti-hero of the Franco-Belgian school of comic books. The series, written and drawn by Franquin, features the various mishaps of the titular character, who terrorises his colleagues in the offices of the Spirou magazine with chemical experiments, cacophonic eruptions on his Gaffophone, and other types of typical office shenanigans. There is, as far as I recall, one panel featuring chess in the series, which you can see below. It comes from what might possibly be something like volume 5 of the series, but the entire series is the most chronologically confusing thing ever,1 so let’s just talk about chess. 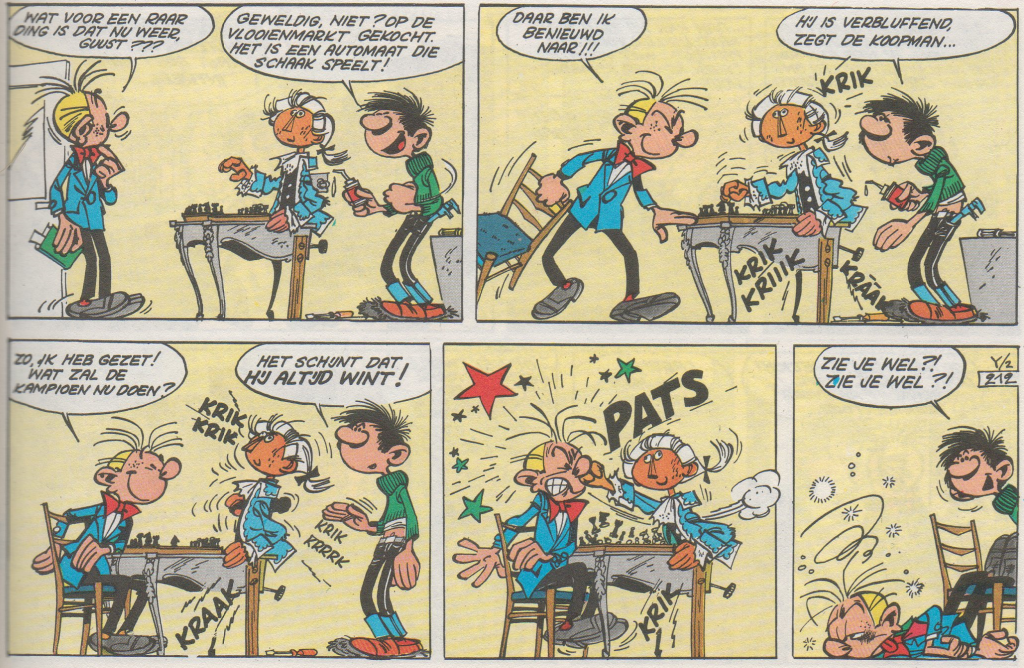 Usually I’d give a translation, but the drawings make that pretty redundant, I think.2 They are quite typical for Franquin’s style, and make a nice contrast with the Tintin drawings from a few weeks ago. Notice the many speed lines, the exaggerated facial expressions, the stars, etc. The gist of the joke is that Guust has found a chess automaton which “apparently always wins”. Kwabbernoot is eager to test it and finds out the hard way that, for once, Guust is right.

The idea of a chess automaton is probably inspired by the Turk, which was a hugely popular attraction at the end of the 18th century, when automatons where all the rage and a chess-playing automaton seemed the highest possible achievement.3 Now, of course, chess playing robots are almost commonplace, but a proper mechanical automaton that can play chess is still the stuff of a madman’s dream.

You might be wondering by now why I picked this for my blog. After all, the game has just begun and we don’t really see the board clearly enough to see whether the pieces have been the up correctly. For this reason, I am not going to give you guys a diagram this time.4 Still, there are a few things wrong here. For starters, Kwabbernoot has the black pieces and yet he begins the game. (Which, incidentally, is probably the reason he gets clocked.) But there’s more! Look at the fourth plate: Kwabbernoot has put his knight in the middle of the board, apparently. I could maybe accept that it is on a6 – on the very border, teetering on the edge of a5 – but black’s queen knight is still at home base, so that can’t be.

Kwabbernoot, therefore, is a cheating son-of-a-bitch. (Which, incidentally, could also be the reason he got clocked.) And yet he dares to complain that Guust is a bad role model for the young readers of Spirou! Bah! Humbug!

Realism: ½/5 The position is technically not impossible: the black knight could be on e4, and the game could have gone 1.Nf3 Nf6 2.Ng1 Ne4. But then again we know it hasn’t.

1. [You see, the series started with a small unnumbered album. Then there were numbered albums 2 through 4, after which the unnumbered original was demoted to number zero and a number 1 volume was released. Then came volume 5. It was the last to be made in an oblong format, all further volumes being released in the standard A4 format. When the original 5 (6, really) volumes inevitably went out of print, they were re-released on A4 as well. Due to this change of format, there was not enough content for five volumes, so by now the series consisted of volumes 6-14 and R1-R4, an album 5 being conspicuously absent (which became a running joke in the series). This, the Dupuis publishing house decided, was the perfect moment to release a new volume 0 which included the original volume 0 and some unedited content to make it a full A4 format volume. A year later, twenty-six years after the first issue was printed, a number 5 (or rather R5, the R meaning retrospective) was released, followed after more than ten years by volume 15. Then Dupuis decided this was all a bit confusing and released a new series entirely, publishing everything in the right chronological order in albums numbered – gasp! – from 1 to 19. Well, 1 to 18, since number 19 was really the number 16 of the original series, consisting of Franquin’s last efforts and a few bit and pieces previously left unpublished, from advertisement and so on. The volume 5 from my title refers to this second series.]↩
2. [Also, I’m lazy.]↩
3. [And not actually a real automaton.]↩
4. [Also, I’m lazy.]↩