Due to enormous success1 the last time I commented on a chess-themed movie, I will do it again. This time, the focus will be on a Dutch movie, because focusing on obscure films in minor European languages is a sure-fire way to bring in more hits. It is called, as the brighter reader might have gleaned from this post’s title, Lang leve de koningin (which can be translated as Long live the queen2) and was written by Euwe’s granddaughter Esmé Lammers. It won a prize for best Dutch film of the year, but that’s like winning a concours d’élégance for Hyundai Matrices. Let’s see what it gives. 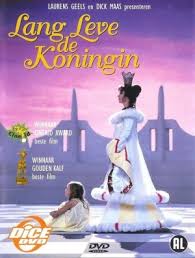 We start with a bunch of young kids being excited about getting their homework back. A highly implausible start. On of the kids is our protagonist. She’s called Sara and apparently not very good at writing essays.3 Her results are bad all over the line and her father is apparently in South Africa. I think she’s supposed to be quite sad, but a moment later she’s skipping, so it can’t be too bad.

On her way home, she notices a boy dropping a set of chess pieces and helps him find them again. To see whether the set is complete, they put the pieces on the board. The white queen turns and smiles at Sara. Is this the beginning of an inevitable descent into madness? Is our protagonist psycho? Wil this turn into a thriller?

Sara gets home to her grandfather and they get some exposition out of the way: Sara’s mother used to be very good at chess, but lost all interest at some point. I’m guessing that has something to do with Sara’s father.

That evening, grampa is reading the newspaper. Sara’s attention is caught by an announcement for a chess tournament – and rightfully so: the word tournament is misspelled!

The next day, the boy with the chess board – Victor is his name – appears at school. He decides to help Sara with her homework and ends up teaching her how to play chess. This is done by cutting to a completely different world where a queen is inventing a game for her very bored (and incredibly childish) king. The scene stops before they have invented all the rules, because Victor gets dizzy. I suspect he might be suffering from Unidentified Photogenic Plot-Convenience Disease.

That evening there is a chess tournament on television, with a very strong player from South Africa. He’s named Bob Hooke (a reference to Bill Hook maybe?) and probably Sara’s father.

The next day at school, Sara’s teacher announces that he’s going to give a simultaneous exhibition. The best players of the school will get to play in another simul against Bob Hooke. Of course Sara wants to play and of course four other children are picked from her class instead. One of these is Victor, but I’m not sure whether that will turn out to be important.

Sara’s teacher offers to give her extra lessons in exchange for chess lessons. Sara’s mother is vehemently opposed and doesn’t want her learning chess at all. She sends Sara to bed. Time for another dream sequence. The queen decides to introduce the game to the white king the day after, which will hopefully curb his enthusiasm for warfaring. They need Sara for this (why?) which means she has to be home in time. But her remedial class is tomorrow! Oh noes!

The next day, Sara’s private remedial class. The teacher is giving her some sums. Sara’s doing well.

Gaaaaaaaaaaaah! Oh, holy fucking shit. Look at this. Look at it, I tell you! 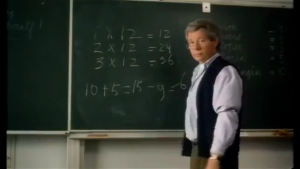 What the fuck is this? It’s horrible, that’s what it is! It’s criminal! No wonder the poor girl doesn’t understand. Who could? 10+5=15-9=6?! What? How?! Just look at what you’ve written on the board, you drivelling dolt!4 This is the kind of thing that will cause the downfall of humanity. This is what makes our college students so afraid of math. The movie has made no chess errors so far, but this… this is in a different category altogether. It’s… It’s…

Oh right. The film. Sara escapes from her remedial class to go home and go to sleep. She gets to the chess world again and plays with black against the white king. The game goes as follows: 1. f3 e5 2. g4 Dh4#. Well, that was anticlimactic. Anyway, the king doesn’t want to go to war anymore, so I guess this plotline has been resolved.

At school, the teacher is playing his simul. After some insisting, Sara is allowed to participate after all. During her game, the film intercuts with a dream sequence and Sara is talking to the pieces. This really is a thriller.

The teacher offers a draw to someone without making his move first! Burn him! Burn him!

The teacher loses, of course, but he manages to do so in 13 moves [cfr. below]. And she’s the last one playing, so all other players must have lost or drawn in fewer moves. Amazing.

At last, Sara gets to play in her father’s simultaneous exhibition. Her mother says against grandpa, that she doesn’t want her to, because Bob Hooke – who is indeed Sara’s father – lives only for chess and that Sara wasn’t his choice.

Nevertheless, Sara arrives at the simul. But she has to put her fancy board aside and play with a regular set. A set without talking pieces. The horror! She has no idea what to do with it.

In the end, she consults with the white queen she keeps in her hand. Now everything goes well.

Victor gets dizzy again! He has to go home, and Sara goes with her, forgetting her board.

Meanwhile, Hooke was very impressed by Sara’s game and decides to bring her board to her house on his way to the airport. He gets in his taxi but sees Sara with her mother who, of course, is the long lost love of his life.

They end up together and the film.5

1. [Maybe?]↩
2. [As can verlepte bloemist, but then the translation wouldn’t be correct.]↩
3. […yes, I admit. Do you think it is easy? Do you think I like to live life like this? Constantly worrying someone will find out, someone will notice? Always a prey for this… this unnatural desire? And there’s nowhere you can turn, no-one who will help you! Not if you’re in love with zeugmata.]↩
4. [Even in modular arithmetic this wouldn’t make sense, since there should either be bars over all terms, or the equalities should be congruences, or otherwise 10 wouldn’t exist.]↩
5. [See above.]↩