By: Nikolaas VerhulstPosted on January 8, 2019

In the beginning of the nineties, things were changing fast in the popular music scene. Hair metal and soft rock were going out of style fast, grunge and R&B were taking over. One of the big new names in the latter genre was the ridiculously named Boyz II Men, a group from Philadelphia that attacked the American billboard with the equally ridiculously titled song called Motownphilly in 1991. The main premise of this song is that Motownphilly is back again, a claim on which considerable suspicion is cast in view of the fact that Motownphilly never really was; motown, a contraction of motor and town, as a genre stems from Detroit, not Philadelphia. 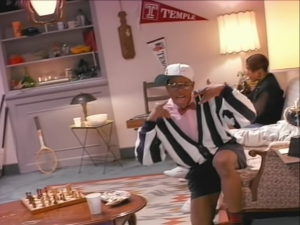 The guy in the Juventus jersey has just left what is either his breakfast or a coiled-up python to spread the word of the alleged return or the Motownphilly. He is so enthused by the good news that he simply walks past his chessboard without sparing it a glance. This careless attitude is unfortunately shared by the cameraman who seems to be more interested in wandering trumpet players and zebra-looking dudes than in a good, honest chess board and the hardships faced by a blogger specialised in chess in popular culture. In short: I didn’t get a good view of the position. I could try to reconstruct it, but I have no high-quality source for the video and my attempt at a reconstruction would probably be as close to the actual position as Bum Bum Tam Tam1 is to Bach.

So how on Earth am I going to fill this blog post? Well, I cannot give you the actual position, but I can still give you some boundary conditions describing a set of positions which contains it. The most surprising boundary is given by the fact that the board is set up correctly. With that, al positive things one could say about the position are said, so we’ll have to delve into less pleasant boundary conditions now. The most obvious is that, apparently, someone in the crew had heard that the centre is quite important in chess and decided that it therefore was a good idea to crowd an enormous amount of pieces on the 4×4 central squares. Another boundary condition is that one of these pieces crowding together in the middle is the black king, because obviously the king should lead his troops.

But the most disturbing boundary condition is that, after a very short appearance, the poor board is left and never mentioned again.

Realism: 3/5 but that’s little more than a random number. The position does not seems to be impossible.

Probable winner: Well, that’s a hard one! Not only do I not really have a good idea of what the position could be but I don’t even know who’s playing.

1. [I’m still amazed that’s the title of an actual song. At least Tritsch-Tratsch polka means something.]↩