By: Nikolaas VerhulstPosted on January 15, 2019

I’m not really sure were this cartoon comes from. It can easily be found on YouTube or Dailymotion, but none of the about five bazillion uploads seems to be the original. The internet movie database remains completely silent on its existence. According to the Looney tunes fanwiki, one of the few places that mentions it at all, it appeared first on the official Looney Tunes website somewhere in the early 2000s, but who made it, where, and when exactly I have no idea. The animation is certainly not up to par with the old cartoons from, say, the fifties, it is shorter than the oldies, and many of the jokes are straight copies from the golden age of the Looney Tunes but, as far as webcartoons go, you could do a lot worse. 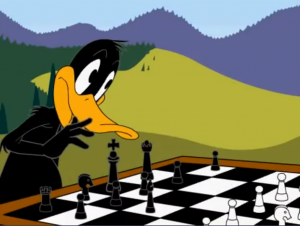 There is a surprising amount of story for a less than four minutes cartoon. We see Bugs Bunny painting. Then we see Cecil the turtle playing against Daffy Duck. Daffy is – and this is a credit to whoever made this cartoon – his usual boastful self, belittling Cecil’s1 move (which we don’t get to see) and delivering checkmate. There are, whoever, a few worrying subtleties wrong. For one, they’re playing on a 6×6 board. For another, the position seems to be the following:2 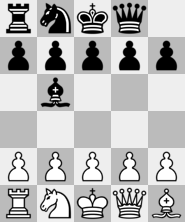 although a6 is a black square in the cartoon. It is in this position that Daffy surprises friend and enemy alike by playing Kc6-b3 and claiming checkmate. This seems odd to Cecil,  who takes out the rules of chess. Indignant with rage, Daffy throws over the pieces, launching the white king right through Bugs’ canvas.

Bugs returns it to Daffy, who has started a new game against Wile E. Coyote. They have arrived at the following position: 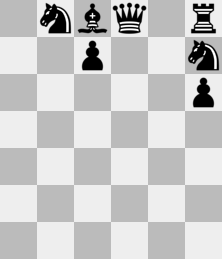 Yes, there is an extra file now. Possibly even more, as most of the board is not visible. Bugs adds the white king on d6, leading Wile, who’s playing white by the way, to claim checkmate. He’s right, of course, it is a checkmate but he’s the one who has been checkmated! Whence Daffy’s anger, then? Whence Wile’s happy smile? Is he that eager to flee the board? Or does he just want to chase the roadrunner again?

Whatever the case may be, Bugs is coerced into taking his place and soon reaches the following position: 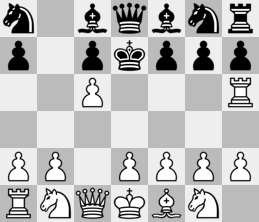 where he has just delivered mate by playing his pawn to c4. As you can see, the toons have once more gotten creative with the size of the board, this time opting for a 7×8 board with what must have been an extraordinary starting position.2

After this third disaster, Bugs suggests Daffy take up tiddlywinks instead. Not a bad idea, but I would suggest a chess book.

Probable winner: Anyone but Daffy.

1. [Who is pretty much the only character that usually beats Bugs.]↩
2. [Yes, this editor even does non-standard board sizes! Only rectangles, though. Nothing is perfect in this world.]↩
2. [In fact, either the white rook or white’s c-pawn must have started on the third rank at least, but the full proof is not immediate. We leave this as an exercise for the interested reader.]↩