Gather round, ye young ones, and listen as an old man tells a tale of days gone by. Suppose that, long time ago before the internet, you wanted to know about filtered rings, or Malagasy lepidoptera, or you found yourself running into huge ships all the time. How could you possibly find out whether any new research was published on the subject? Or how would you find the latest kitchen gadgets? Or useless things to put on a shelf and occasionally dust off? You would leaf through a catalogue from some big shop, like Sears!

That is precisely what I have done. The 1985 Sears catalogue is available on archive.org. If you leaf through it, you will find clothing, watches, telescopes, teddy bears, and all sorts of toys. Among the toys, there are obviously chessboards. And, to entice people to buy them, they have been pictured with an attractive display of the pieces. Attractive, that is, to people who have no idea about chess.

I do have some certain inklings about chess1 — and I don’t think this position, which is the one appearing on the chessboard on the right, is attractive at all:2 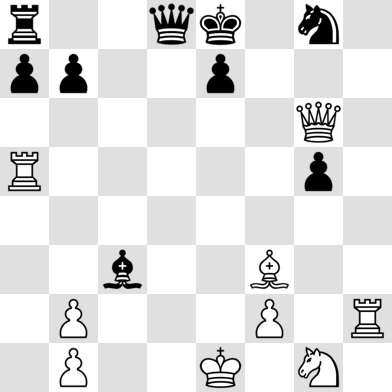 This is an unmitigated disaster and it shows clearly that Sears was collaborating with the Powers of Evil, whatever they may be. Every now and then, I encounter an actually illegal position on this blog. Very rarely do I encounter one which is doubly illegal. Not only are both kings in check, but there is also a pawn — a white pawn, no less! — on the first rank.

Realism: 0/5 My wish this Christmas is the non-existence of this catalogue.

Probable winner: Who knows? There is no point in analysing nonsense.3

Why would anyone ever visit such a calamity upon their fellow humans? Well, I have a theory. I think it is an attempt, a vile, disingenuous attempt to make the chessboard next to this one seem better. You see, that one is considerably more expensive, but, unfortunately, the pieces are butt ugly. But at least the position is legal: 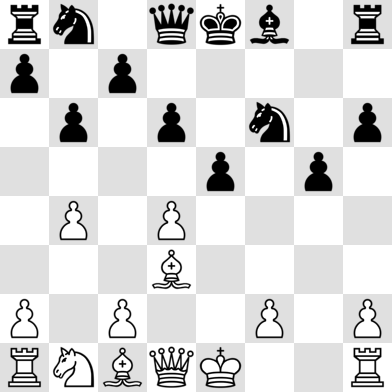 Black, somehow, traded his very good bishop against white’s king’s knight. This trade netted him a pawn, but the gaping holes on his white squares look scary. Indeed, if white is to move, then Bg6+ followed by moves like Qf3 and Bb2 spell disaster for black. On the other hand, if black is to move, then e4 solves most of black’s problems.

But not that’s in this book.

Realism: 3/5 It’s not ridiculous. The exchange of a bad position against a pawn is even quite typical. But it’s not clear how this exchange happened or why the white b and black g pawn advanced as far as they did.

Probable winner: Whoever is to move has the best chances. But they’ll still have to work quite a bit and things could very much go awry.