Once more, quite some time after the crime doctor and Philo Vance, we’re brutally tearing another long-forgotten franchise from Morpheus’ arms and putting it right in the spotlights.1 Fu Manchu started as a character in a series of novels by Sax Rohmer but, somehow, a big franchise grew up around him. There were movies before the Universal monsters were around. There were comics before DC or Marvel existed. He gave his name to a type of moustache. Obviously, but surprisingly only in 1956, there was a television series.

And you know what? Fu Manchu is a villain! Isn’t that bizarre? There are few enough franchises based around villains, and here’s one that’s older than Batman! In fact, Fu Manchu is obviously inspired by the Yellow Peril ideas of the late nineteenth century that were to be mocked later by Hergé in The blue lotus. He is a scheming, evil man, trying to take over the world.2

The television series we’re talking about today aired in 1956 and was put into the freezer after just a single season. At the beginning of each episode, Fu Manchu is shown playing chess against his nemesis, Denis Nayland Smith. How evil Fu Manchu is can be deduced from the fact that h1 is a black square.3 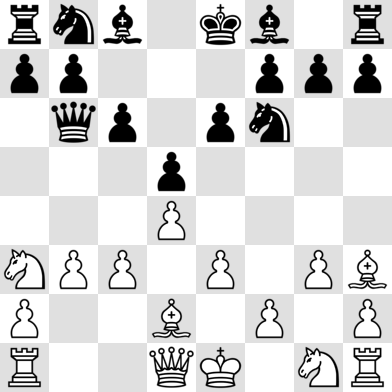 I think this position is broadly correct, but the video quality I’ve seen is not enough to be fully sure. Especially the black pieces are almost as dubious as their master.

White plays Nf3 in this situation, which is perfectly understandable. Black answer with I think Qa5, possibly Qa6. At first glance, that’s less understandable. Perhaps it speaks for me that I can’t understand this evil man’s moves, but perhaps it speaks against me that it works: white apparently assumes his opponent is just shuffling pieces around and quickly plays the blitheringly stupid Nh4. Even if the knight on a3 were not hanging this would be silly, but the knight is hanging. And it gets munched. Of course.

And that’s how evil wins. The only thing necessary for evil to triumph is for good men to do stupid things.

Realism: 3/5 This is surprisingly believable. It’s a bit puzzling that white seems to have made eight moves and black only five, but compared to our usual fare that’s splendid.

Probable winner: Black. He got a piece for nothing.

1. [In front of at least three people!] ↩
2. [Just once I’d like to see a series about someone who rules the world and tries to get someone else to take his place.] ↩
3. [And he doesn’t even use this diagram editor!] ↩