The hugely popular television series about crime scene investigations, CSI, started over twenty years ago now. Since then, there have been so many season, adaptations, reboots, spin-offs, and spin-offs of spin-offs and by now you could probably fill an extra season with crimes committed by people that worked on it in some capacity. And, of course, if you have so much stuff, some of it will be about chess. Unfortunately, it happens in the sixteenth episode of the fourteenth season. In other words, when all original ideas have long been used up and the show is running on inertia and half-chewed cud that was rejected ages ago.

.And so we get, once again, a serial killer with a chess motive. Yawn. We have seen that about a billion times before. An unusual and slightly grotesque detail is that the killer makes his moves by killing clergy, Elvis impersonators, or people on horseback and leaving them on crossroads between streets like 4th street and E street.1

The investigators find out there’s a big tournament being held in the city. That, of course, piqued my interest. A big chess tournament in a television series — it’s going to look ridiculous, isn’t it? Now, that’s clearly a rhetorical question, but it nevertheless gets answered. With a resounding ‘yes’, unsurprisingly.

In the tournament hall, there is a guy, whom we later find out to be former champion Schrute, giving a simultaneous exhibition while, at the same time, an actual tournament is being held a couple of meters further on. And there’s also a bar! While the camera pans over the boards, we see one of the players keep his finger on his rook. Very annoying, but plausible: I’ve seen this happen that players don’t yet want to finalise their move, so they keep a single finger on the piece they’re moving. While the camera pans further, we finally get a decent view of one of the boards:2 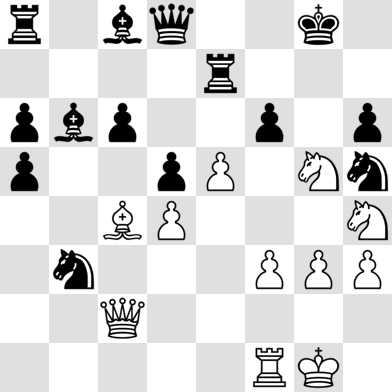 I’m not entirely sure about the positions of Qc2 and Nb3 and there may be another piece or two hiding on white’s queen’s side but whatever is actually happening there, this position is more suspicious than a dead Elvis impersonator turning up in Vegas. Why are there two white pieces hanging? In particular the knight on g5 is odd. Where did it come from? How long has it been there? Why has it not been taken ages ago?

The camera pans over a few other boards. Each of them is clear enough in view that I would try to reconstruct them if they were the only options in the whole episode. But such is not the case. And I really want to get to the main dish.

Our chief detective seems to have the game the killer has been playing on his board. Based on claims a bit later on in the episode, the position he should be looking at is this one: 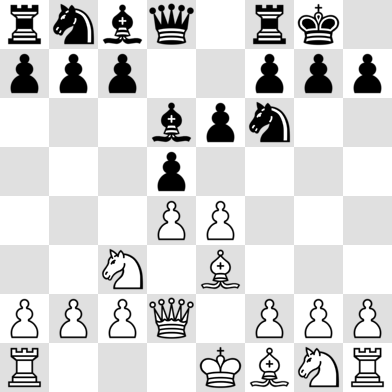 but, in the position he actually has on his board, the white e-pawn is still on e2 and the white king on d1. And he castles! This places me in a precarious situation. On the one hand, I understand that the killer is upset by this mangling of his position. But, on the other hand, he has left his e-pawn hanging for no obvious reasons.

And things get worse. Our detectives find out that the killer is following a game between a Troy Parker and Schrute in 1998. They also find out that; after castling queen’s side, Parker played Be3. Be3, mind you! That has already been played! You’re going the wrong way, you planks! Their local chess expert tells them that this was the losing move — which I believe; it’s even illegal! — but he also says that white was winning. After eight moves! In a world class tournament! And he’s supposed to have been winning with Na4!3

There’s more to the episode, but I can’t stand it any more. This is sickening.

Realism: 1/5 & 3/5 The first one is pure bollocks. The second one is a vaguely plausible position, probably the result of a French gone wrong,4 but the white e-pawn’s inexplicable invulnerability is bizarre.

Probable winner: Beelzebub, the lord formerly of the flies, who has left his insect minions behind as too mildly annoying and turned to ridiculous chess scenes instead.

1. [So these murders could have been prevented by a minimal amount of creativity in naming streets.] ↩
2. [Here you get a decent view of a diagram editor.] ↩
3. [I wouldn’t put it pas them to actually put a knight on a24.] ↩
4. [I realise that’s pleonastic.] ↩