A while ago, when I talked about Hogan’s heroes, I mentioned how odd of an idea it seemed to have a comedy set in a prisoner of war camp. But when Hogan’s Heroes came out in the sixties, it was already not a new concept. As early as 1953 there was Stalag 17,1 a very well-received — and very good — drama/comedy directed by Billy Wilder for which William Holden won the Oscar. The plot is as follows. Trouble is brewing in one of the barracks, because a traitor is in their midst. Who can it be? And can they unmask him before their hidden compatriot gets found out and killed?

The problem is exacerbated by the fact that the spy cleverly communicates with the kraut via small messages hidden in the black queen of the barrack’s chess set. Given that premise, it is not so surprising that we see quite a lot of the chess board. Unfortunately, the pieces are usually in their starting positions, which is not very exciting.

But once we see two people actually playing. The position is shown fairly clearly and, although black’s king’s side is somewhat doubtful, I suspect the position is as follows:2 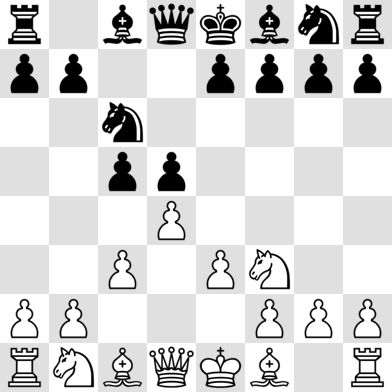 To be fair, the movie is only two hours long and, by this point, three quarters of an hour are gone already. This leaves but a scant few minutes to cover the game. And, given that it’s a Colle, it may take another week or so before action gets started.

Realism: 5/5 This position has occurred in quite a few games. There’s even one were Alekseenko has black. Moreover, it is a position that very plausibly could arise between two amateur players in the forties.

Probable winner: It’s too early to say. Black has an excellent winning percentage after Nf6, but I can hardly believe that has much to do with the position.

1. [I’m so chess-deformed by now, that Stalag 17 sounds like a chess move with some weird fairy piece on an extended board.] ↩
2. [Avoid prison for bad diagram making with this.] ↩
3. [‘A talpid’ is probably not enough.] ↩