Following in my own illustrious footsteps, I will once more regale you with my running commentary — purely from a chess point of view, of course — to a book. Our specimen is La table de Flandes which, under its English title of The Flanders panel, has already made a very brief appearance in a previous post. In that one, I only discussed the cover of that single, English edition. Now, I’ll do much more. Feel free to scream in horror at that thought.

You can stop screaming now.

The book centres around a painting from the Flemish primitives school which shows two medieval noble men at a game of chess. The owner of the painting wants to sell it and has it restored by Julia, our main character. She finds a message, apparently left but painted over by the painter in 1471. It reads: quis necavit equitem? or who killed the knight? They immediately assume this is about Roger de Arras, who is possibly one of the people depicted but was murdered a few years before the painting was made.

Some seventy pages in, Julia’s friendly father figure, César, finally suggests the position might be a chess problem. This leads them to a local chess club. The president proudly tells them that one of the members of their club has written a one hundred page study about “the four lines of the Nimzo-Indian”. What could those be? The main lines are clearly e3 and Qc2, but then there are quite a few more or less equally popular lines: a3, f3, Nf3, g3, Bg5, the old Spielmann Qb3, and even the modern, less immediate, Bd2. We don’t get to find out, but by the end of the chapter they have their chess expert.

He starts to study the position at the very beginning of the next chapter:

Muñoz: It’s a real game. Something strange but logical.1

Okay. At this point I haven’t seen the position yet, but for some reason I’m sceptical. I have some experience with the depiction of chess in all sorts of media, and while it’s usually strange, it’s very rarely logical.

Shortly afterwards, we get to see the position and, oh boy, is it glorious! Here it is:2 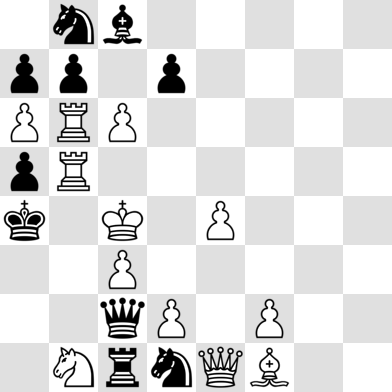 “A real game”, huh? Now, I have talked to a chess player or two in my life and I can say with confidence that not a one of them would look at this position and go: “oh, yes, that’s a real game alright and definitely not something concocted by some deranged brain on twelve kinds of drug”.

The next chapter begins. Muñoz, our chess expert, does some retrograde analysis. He points out that none of the black pawns, nor the bishop, either of the knights, the rook, or the king could have moved. He concludes that the black queen must have just moved; more precisely, from b2. But surely this is a non sequitur! Why could not a pawn from e2 have just taken on d1 and promoted to a knight?3 There’s twelve white pieces left and two are accounted for by the pawn on a5, but that leaves two more for a black pawn to come from the f-line to d1.4 Is this going to be a plot point or is this the author messing up? Oh, someone dies in this chapter, probably murdered.

Our chess expert gets weirdly sidetracked. He assumes not only that the black queen moved last, but also that white’s previous move must have been attacking that queen because she otherwise would have been taken. That’s not how you do retrograde analysis! If a king is attacked it has to move by the rules of the games. A queen not so much. So you cannot just say that the queen could not have been under attack for one or more moves without being taken. And saying precisely that is the crux of this book because, under that assumption, you can show that the black queen must have just taken a white knight on c2. From this, our expert concludes that the black queen has taken the knight, which suggests that Roger de Arras was murdered by the woman pictured in the background of the painting.

When our protagonist arrives home, she finds a small business card on her intercom. On it, there is a move. Oh.

This book is one of those.

We have seen them before; books or movies, or possibly potato based communication forms, in which a killer is on the loose who plays chess with the detectives looking for him. The detectives are incompetent here, so our heroes have to step in.

There are a lot more moves, discussions of moves, possible symbolic meanings of moves, a couple of plot points, and another murder victim. I am not going to go through them all, because I would still be here come Christmas. If you really want to see the moves — including one misprint! — you can find the .pgn viewer at the bottom of this page, but it’s not what I’m most interested in.

The main thing I wanted to do is review the retrograde analysis. The analysis itself doesn’t really make a lot of sense, but I’m less annoyed by that than you might think. Not only because it is rare that I get to talk about retrograde analysis on this blog, but also because the author has woven an intricate net of symbolism where the pieces are not only supposed to play a role in a retrograde problem, but also in a standard chess game,5 a medieval murder mystery, and a nineties crime drama. Getting all of that to make sense is a nearly impossible task.

Final verdict: It’s not bad. Pérez-Reverte is a decent writer and, if you can overlook the somewhat dubious chess bits, the plot is pretty good, too.

1. [The very free translations are done by your servant, who hardly knows any Spanish. Arturo Pérez Reverte should not be held responsible for any awkward formulations; although he definitely should be held responsible for awkward chess in his book.] ↩
2. [El archivero de ajedrez de Flandes  te presenta el mejor editor de diagramas.] ↩
3. [Raymond Smullyan, in his highly entertaining The chess mysteries of Sherlock Holmes (Hutchinson 1980), gives a similar problem but with the important stipulation that no underpromotions happened in the game. Possibly, this problem inspired  Pérez-Reverte; he certainly quotes Smullyan.] ↩
4. [This raises two interesting questions. Firstly: when where promotions and underpromotions, respectively, introduced? Secondly: can someone come up with a proof game where the last move was not with the queen? There is a reward of seven comma twelve entirely virtual points for the first to answer each question convincingly.] ↩
5. [Well. Perhaps standard is not the right word.] ↩