People often think that early childhood is a happy, carefree time where other people make your food, where you have no bills to pay, and where all time is free time. But it’s not all sunshine. Sometimes, you are made to eat sprouts. You have to go to bed at a given time, usually quite early. And you are expected to be entertained by disastrously terrible cartoons. One of those is Bernard, or possibly Bernard bear; I’m not quite sure. It features an eponymous, slightly unpleasant polar bear and his incredibly uninteresting antics. Except in one episode.

In one episode, he plays chess! In a park. Against himself. While whimsical music is playing. I think someone saw Geri’s game. That’s pretty good material to get inspired by, but the auteurs of Bernard Bear were apparently unaware of what made that a good short film. Or perhaps they were aware and actively tried to avoid the good bits.

But in that case, too, they failed. Because they have copied one good bit: the chessboard is plainly visible and reconstructing the position is a mere triviality. This is it:1 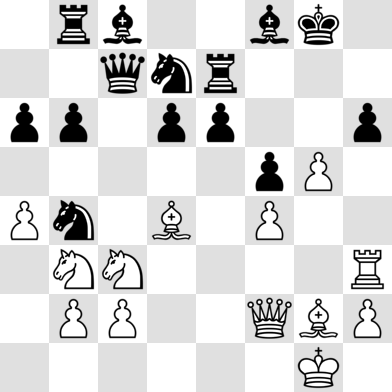 Bernard, our polar bear, is black.2 Presumably, this is why people say that polar bears are critically endangered. He notices that his king’s side is utterly wrecked, desperately looks for counter play, and decides to play e5. Then he trots to the other side and, as white,3 he quickly plays Nd5.

While he makes he way back to the black side of the table, a small penguin saunters up to the table and plays Nc1 — with the white pieces. Bernard is not amused and knocks the penguin out. That’s a perfectly reasonable reaction to such impudence. But then he walks back over to the white side and plays Bc3 himself! Death to all polar bears.

Then, inevitably, they decide to play the game against each other. There follow some quick close-up shots with fast and unidentifiable moves. There is an old fashioned analog chess clock, running faster than a cheetah on speed, which suddenly goes off like an alarm. What? How? How would it even make sound?

But, hey, there’s one good thing: the episode ends with Bernard getting smacked in the face with the chess board.4

Realism: 3/5 The position itself seems to more plausible than usual, but the moves that follow are beastly.

Probable winner: White is doing pretty good in the beginning, but then things deteriorate quite fast. In the end, the polar bear gets conked on the noggin’, so the winner is the universe.