By: Nikolaas VerhulstPosted on December 19, 2017

After last week’s post, I was kind of struggling with writer’s block. I mean, how do you follow up on accidentally composing a chess problem? The only way out I saw, is doing something easy. Something many people know, which can readily be found online and for which a diagram, or possibly more, can easily be made. Something like Geri’s game, the Pixar classic which won the 1997 Oscar for best animated short film. 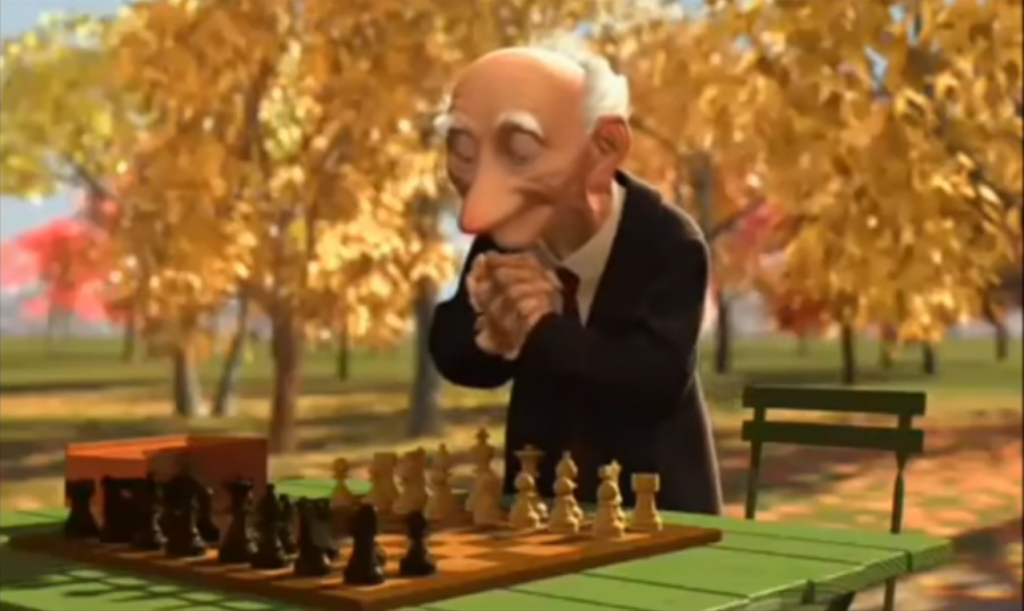 The plot of the short, if such a word is appropriate for a five-minute film, is that Geri1 is playing a game of chess against a more boisterous — and less bespectacled — version of himself in a deserted autumn park. We unfortunately do not get the chance to see the whole game, but we see quite a bit. We see the beginning, for example, and it is quite promising: Geri opens with 1.e4 and, well, Geri bis, I guess, answers 1. … e5.

Then Geri plays 2. f32 and it’s all downhill from there. You can play through the few moves we get to see at the bottom of this page, but I warn you: it’s not pretty. Even worse, it’s not consistent. After white’s sixth move, we are treated to the following spectacle: 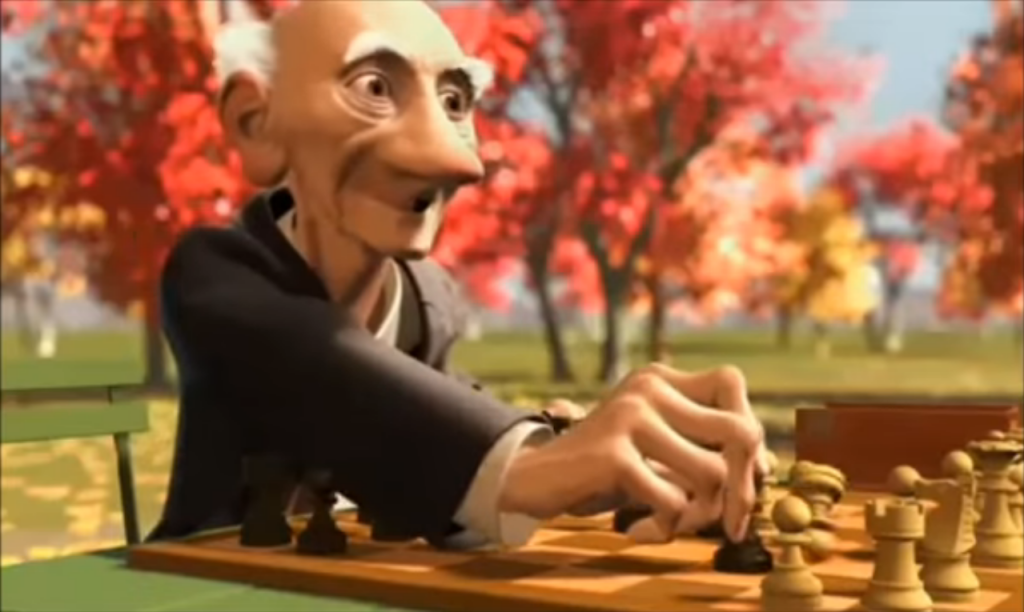 Black seems to be capturing a pawn on c3, which shouldn’t be there at all. The only possible explanation is that a number of moves must have been hidden in the cut from Geri to Geri bis, but what moves it must have been! Since white’s queen’s knight has already been taken, the one currently on b1 must be his king’s knight, which we last saw on h3: a full four moves away from b1.

A few cuts later, the following position is on the board:3 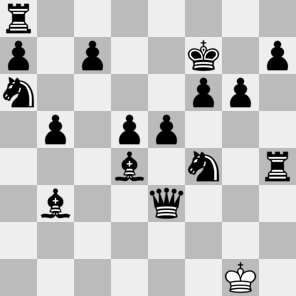 Amazing! White’s whole army has been eradicated without defeating a single enemy! Geri’s plight is truly severe, but he finds a last resource: he fakes a heart attack and slides underneath the table. At the moment were his opponent looks down, he comes up and turns the board π radians. Apparently, both players consider this a legal move, since black begrudgingly accepts his fate, plays Kf1, gets mated, and hands over the stake: his dentures.

Realism: 1/5 The position is not illegal, but it can hardly get more unlikely. Even the biggest patzer should be able to capture at least a pawn somewhere. Plus, how did the black rook get to h4?

Probable winner: The original Geri can be seen walking away with his prize.

1. [Whose name is a very thin allusion to his, obviously rather advanced, age.]↩
2. [This opening is known as the King’s Head opening. Does anybody know why? Is it named after the club in London?]↩
3. [The diagram is an Oscar worthy performance by this thing.]↩