Last time, I spotlighted an example of the spaghetti western. This week, I want to show that other famous genre of Italian movie: the giallo. ‘Giallo’ just means ‘yellow’ in Italian, but the term is also used for crime mystery pulp fiction after a famous series of such books named ‘i libri gialli‘, i.e. ‘the yellow books’. From there, it was a logical step to also apply the name to movies with similar themes. One of the most famous directors in the genre is Lucio Fulci and one of his more popular movies is Lo squartatore di New York or The New York ripper if you prefer Shakespeare to Dante.

A murderer with the voice of a duck1 is stalking the streets of New York. Lieutenant Williams, played by a very Jeremy Clarkson-looking Jack Hedley, leads the investigation. He quickly realises he’s in a police thriller and that he therefore has to enlist the help of a psychiatrist to catch his man. He finds Dr. Davis (Paolo Malco) alone in an otherwise empty auditorium playing against his chess computer, because that’s what you do if you’re a doctor.

I’m pretty sure the doctor’s opponent is Fidelity Electronics’ Sensory Chess Challenger 8 which, at the time of shooting, must have been pretty high-tech: it came out in 1980 and the movie in 1982. The first time we see the shrink – or his hand, to be precise – the following position is on the board:2 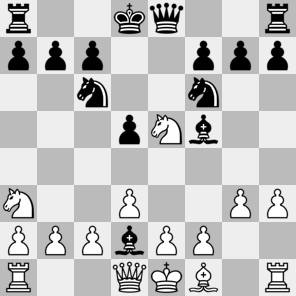 No doubt, black has just captured white’s bishop on d2, which leaves our psychiatrist not much choice. He takes back with his queen, which is answered by Qxe5. Noticing he’s a piece down now, he mutters:

Davis: Don’t tell me you’re thinking of beating me.

Well, probably not, because machines don’t tend to think anything. Also, this engine is notoriously weak.

So what happened? How did the black royalty change places? One could think maybe someone just set up the pieces wrongly but the computer takes on e5, so it must know there’s a queen on e8, not a king. And it could not know that if it had not moved its queen there. But if it did that, and no computer ever would, white must have wasted at least three moves – about as many as the ripper has wasted women.

Realism: 1/5 This is another one of those positions that look quite plausible. Even white’s blunder is understandable: he thought black had put a bishop in his own way and overlooked the riposte Bb4+. But the fact that the black royalty is playing switcheroo drives the realism score way down.

Probable winner: Normally, I’d say black is winning as he’s a knight up, but chess challenger 8 is really weak, so maybe white still has a chance.

1. [Yes. No, really. Seriously. At first, I thought I would finally found out what happened to the disco duck, but it turns out the movie is not that weird.]↩
2. [The diagram can be obtained but presses the relevant squares on this board.]↩