One of the biggest names in popular culture I have not mentioned so far is the almighty mouse, the great Mickey himself. Of course, there are so many comics and cartoons that it is statistically certain that at some point somewhere in some of his adventures, chess was involved. My task, then, was only to find this point.1 I failed. Kind of. I did find a nice,big chessboard on the cover of one of the issues of the Mickey Maus magazine, but it is disappointing in two ways: firstly, it is not Mickey playing but Donald Duck, secondly, I turned to the German edition, as the spelling already made clear. 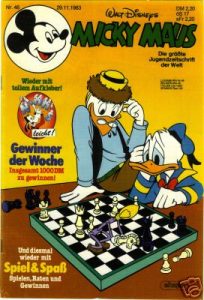 I think this might be the most depressing I have ever featured on this blog – and it might keep that title for quite a while. Our pale protagonists are stuck in a two-coloured limbo, with nothing but uniform yellow and brown as far as the eye can see. Donald Duck has the despondent look in his eyes of a toddler facing a plate of Brussels sprouts. Gyro Gearloose2 looks like he wants to say that it’s all going to be okay, but he realises that it probably won’t and that Donald knows this all too well. Mickey Maus himself has been killed3 and his head has been mounted as a wall decoration. On top of that, a sentient stick-figure lightbulb is doing unspeakable things to a knight.

And, worst of all, the board’s orientation is wrong. It is not very clear whether the white knight that’s being manhandled by the lamp is still in play. If so, I suspect the bulb might drop it on f7, but this is far from sure. The placement of the other pieces is very clearly the following, with the board orientation fixed:4 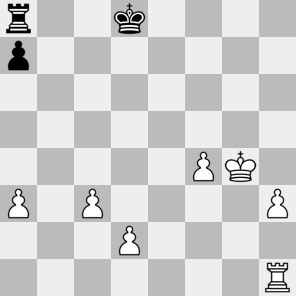 Dear God, that’s  really disturbing as well. What happened to the poor black pawns? Why did the white king march so far up the killing fields while his rook and pawns are mostly cowing behind him? Why did black’s rook stay paralysed on a8 for what must have been many, many moves? What brought the black king to d8 but completely destroyed everything around him? What murderous rampage took place here?

Seriously, when I decided to do a Mickey Mouse post, I was expecting some light-hearted silliness. Some anthropomorphised animals exchanging funny dialogue. General wackiness. Instead, I got some horrors from the deepest abysses of hell, with murdered mice’s heads, depressed ducks, and depraved lightbulbs. And this gruesome scene is labelled Spiel & Spaß – Germany is hardcore!

Realism: 3/5 The realism is not too bad, it’s just a very stark reality we’re talking about here.

Probable winner: White, which I’m guessing is the lightbulb. Donald’s expression strongly suggests he has black.

1. [By the way, this intro was lovingly handcrafted to fit exactly to almost any pop cultural monolith.]↩
2. [That’s the chicken with the hat and the glasses. Now there’s a sentence I never thought I’d write.]↩
3. [He probably fell victim to a Mauser rifle.]↩
4. [Made by the most magical diagram making software in the world.]↩