Let’s continue our discussions of magazine covers. This time, we go all the way back to 1929. Vogue is already a well-established fashion magazine. Chess is already a well-established board game. Alekhine is starting to dominate the chess world.1 Miraculously, there are Belgian players in the world top. Only slightly less miraculously, chess has made it to the front cover of Vogue! 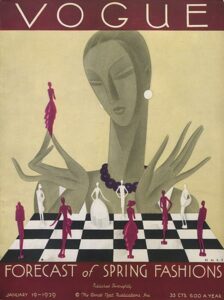 Here we see one of those stereotypical grey aliens with the big eyes, the small mouth, and the triangular face, long before they became a mainstay of popular culture. A futuristic communication device, no doubt for translating human languages, is attached to its ear. When confronted with such an unsettling vision of extraterrestrial life, Vogue asks the obvious question: what is it wearing?2

I, however, think there is an even more obvious question: how does it play chess? The answer seems to be somewhere between terribly and not at all. Indeed, there is not way to know that this is a terrible misrepresentation of chess; it could also be a terrible misinterpretation of checkers.

In any case, the board is five by six, which is not used in any game I know of. The pieces are unidentifiable as well. They seem to be silhouetted figures, possibly based on similar aliens as the grey one. This makes reconstructing the position a rather pointless exercise, so I skipped it. Perhaps I shouldn’t have, because now I have nothing to write about.

Realism: 0/5 There is an alien playing non-chess. Realism has nothing to do with this.

Probable winner: Nobody knows. The aliens apparently master interplanetary travel — or at least communication — as they seem to have gotten in contact with the people at Vogue. On the other hand, movies and books have taught me that humans always win this kind of conflict.

1. [I begrudgingly yield to this omnipresent anglicisation of his name. I think he himself used the obviously superior spelling Aljechin, but this seems to have been ignored by the Anglo-Saxon world.]↩
2. [A necklace and a tank top, apparently.]↩