By: Nikolaas VerhulstPosted on November 30, 2021

John Bull apparently started his existence — life seems too strong a word for a fictional character — in an eighteenth century pamphlet.1 Since then, he has grown into a kind of national personification of England, like the bear is for Russia and Marianne is for France. It is not a surprise, then, that his name was also used for an English Sunday newspaper. The cover of the issue of December 12th, 1950 announces the book The Yangtse incident by Canadian author Lawrence Earl. The accompanying cover illustration inexplicably shows two clowns at a chessboard. 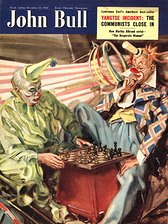 I have never read the book, nor have I seen the 1957 movie, nor indeed had I heard of the H.M.S. Amethyst incident it deals with, but the clowns seem out of place. This is a story about a small British ship getting caught up in the Chinese civil war. How do two Western looking men in commedia dell’arte inspired clown make-up enter into this story? What’s with the emergency trombone on the left?

Who knows? But also: who cares? There’s chess to be discussed! These clowns have at least set up the board correctly. They don’t seem to be particularly concerned about placing their pieces in the middle of their squares. Apart from that, I had no troubles reconstructing the position:2 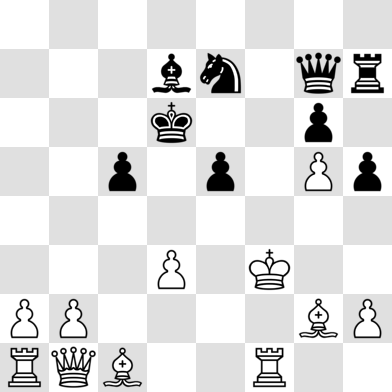 Okay, yes, the players are clowns, but this beats everything. Kings haven’t been this active for centuries! Why has the white queen immured herself like a medieval anchorite? Is she going to start writing mystic poetry?

If so, can she do next week’s blog post?

Realism: 2/5 Giving this two out of five is strong evidence for the diminishing standards in our society. But it’s unavoidable: one point for not being illegal and one point for having the white pieces on one side and the black pieces on the other.

Probable winner: White is up a rook. It might take a while until he has excavated it, but it’s there.

1. [There was a John Bull before that, but he was a composer and as such too refined to characterise a nation. His virginal music is quite good, though.]↩
2. [Except for the tears shed in reconstructing such an ugly position.]↩