I don’t know a whole lot about video games, but even I can tell from a very short bit of gameplay footage that Killer7 is a weird, weird game. There are the cel shaded graphics, which are highly unusual. It looks like a standard shooter, but apparently it’s a rail shooter. There’s a sort of ghost in a gimp suit that comes down on bungee cords sometimes to give you tips in an incomprehensible language. And the plot is bizarre. It is set in an alternative (at the time of release) present and deals with a certain Harman Smith who has the ability to physically morph into seven other people. He uses this unusual skill to hire his crew of alter egos out as hitmen.1 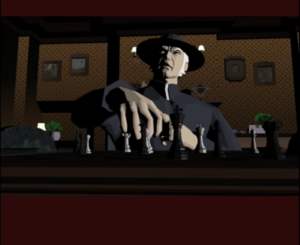 In one of the cut scenes, Harman — apparently in the traditional cassock and cappello romano of an old-fashioned priest — is playing chess with the main antagonist Kun Lan. Kun Lan has black because he is evil.2 He has announced check, to which Harman replies:

Harman: What a coincidence. Check!

When I heard that, I got suspicious. Replying with a check to a check is something that would sound really cool to an idiot but that doesn’t happen very often.

Would the programmers have actually come up with a position in which that could have happened? Luckily, we get a very clear overview of the board, and we can conclude that they did:3 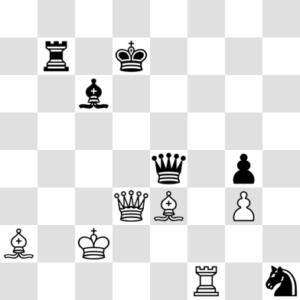 That’s amazing! Someone paid attention here? What else next! Yes, black must have played Qe4+, to which white replied Qd3+. Perfectly viable. Perfectly logical even.

And it leaves me a bit forlorn. What am I to do now? What will I spend my time on? Do i have to find something else to moan about? But what could there possibly be to complain about in the world in 2021?

Realism: 4/5 There is nothing highly unlikely about this position. It is quite rare that so many pieces survive when almost all pawns are gone already, but most of today’s top games look weirder.

Probable winner: That’s very hard to say. White has the bishop pair, but there’s no particular weaknesses in the black camp and the black king is perhaps a bit safer. My guess is that it will be a draw.