Today, we will talk about a group of weirdos with strange customs, largely shunned by society but quite happy on their own. No, not chess players, the Addams family. We will talk about the very last episodes from the first season of the original series. The plot starts when uncle Fester reads some ridiculous report by a psychologist1 in a newspaper stating that couples that fight are really the happy ones. This worries him, because Gomez and Morticia Addams never fight and always seem to delight in each other’s company. At some point, they are even playing chess: 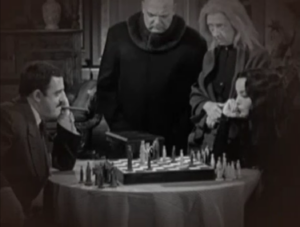 …and Gomez sees this as an opportunity to start a fight between them.

We need a slight intermezzo here. This tv series is from the sixties, which means that it is not exactly in high definition. Moreover, the director seems to have an unsettling obsession with keeping his actors on screen instead of showing the chessboard. Finally, the pieces used seem to be highly non-standard. All of this together makes for less than ideal circumstances for studying the position.

With that, I hope I have given enough excuses for my inevitable failure to make a good reconstruction. Anyway, here’s a bad one:2 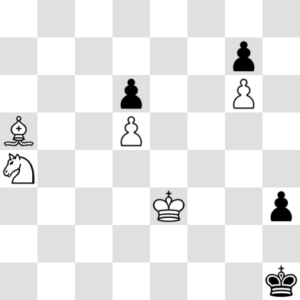 The main problem with this reconstruction are the white pieces on the queen’s side. But that’s not really a problem, as soon will become apparent. Morticia has black,3 and she plays h2.

Fester has recruited Thing, a sentient disembodied hand which is hiding in the box you can see behind the chessboard. While Fester distracts the players by faking a coughing fit, Thing sneakily takes away the white pieces on a4 and a5.

Gomes notices the missing pieces, of course, and Fester tries his best to turn the ensuing conversation into an argument and then a proper fight. It fails, if for no other reason then because the pieces don’t matter at all: white has to play Kf2 anyway, stalemating his opponent. Gomez does play this and the game ends amicably. As it was bound to, according to Morticia, since they are perfectly matched.

Indeed, for once the actors were handed a decent match.

Probable winner: No one. Stalemate is a draw.