Peep show is a critically acclaimed sitcom that cemented David Mitchell and Robert Webb as one of the great comedic duos in British television. It is about Mark, a miserable man eking out a miserable existence working a miserable job for a miserable boss. The worst part of his life is his room mate. A good example of why this is, is provided by the third episode of the third season: Shrooming. Jez — that’s the room mate1 — tries to get a desperately sick Mark to go on a business trip so that he can do magic mushrooms in their apartment with his love interest and some punk who has previously destroyed the door to their toilet. 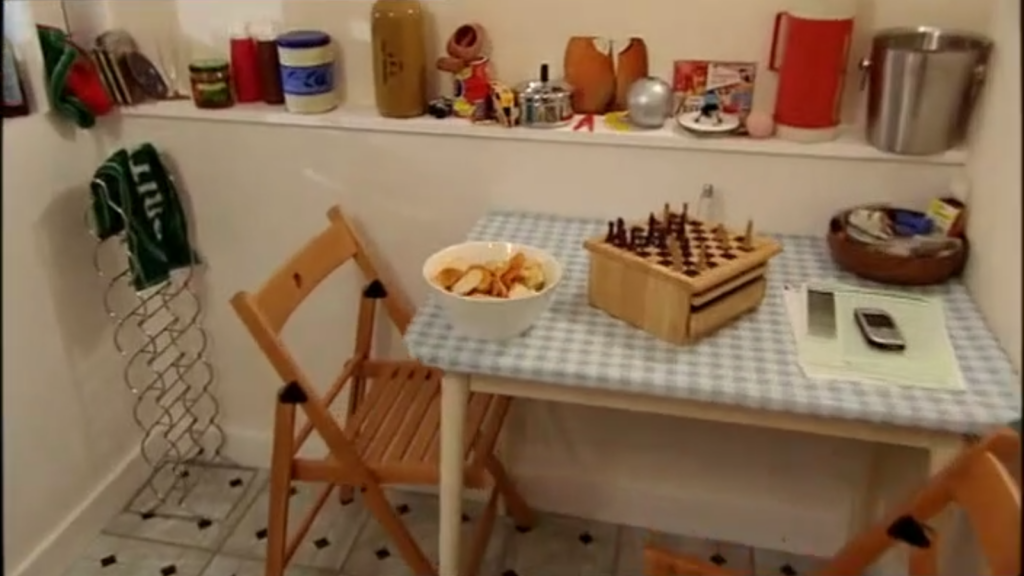 One of Jez’s attempt at making Mark feel better is to prepare a meal of crisps for him — and to put the chessmen ready for him! That’s quite thoughtful of him. Maybe he ain’t so bad after all. Or maybe this is just another ploy of his to upset Mark by showing him some gruesome image. Before looking, I bet it’s the former. Not only is that generally more or less the default, but it’s also more in character for Jez.

So let’s see! The view of the board is very clear, so the following reconstruction is perfectly reliable:2 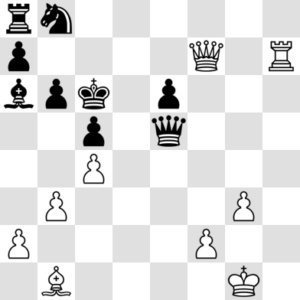 Wait, that actually looks quite reasonable! White has sacrificed a knight for a pawn but has gotten a devastating attack in return. He has chased the black king all the way to c6 and, if it’s his move, he has a pretty coup de grâce at his disposal: Be4+. After Qxe4, the queen is deflected from the protection of c7 and white goes Qc7#. If black plays Kd6, then Qe7# finishes the game. Of course, if it’s black to move, white has a problem.3

So it seems I underestimated Jez. Or perhaps I overestimated his involvement. Maybe Mark was working on his correspondence chess the day before and has left the pieces as they were, putting of making his move to enjoy his imminent victory more. That sounds more in character for Mark than being thoughtful is for Jez.

Realism: 4/5 I can’t say for sure that this position occurred in an actual game, but it very well might have. Black’s queen’s side is underdeveloped, but that may very well be a result of white’s scorching attack

Probable winner: Whoever’s move it is.