I assume, I guess, I hope, that Dutch artist M. C. Escher needs no introduction. His lithographs and woodcuts have penetrated the farthest corners of the Earth and the most obscure backwaters of pop-culture and is widely considered to be one of the finest 20th century artists. He is, in the words of Weird Al Yankovic, my favourite MC. As he was born in 1898, he was smack-dab in the middle of his life when a veritable chess craze burst out in The Netherlands, after Euwe had won the world championship match against Alekhine. A few years later — Euwe had lost his title again — Escher’s Metamorphose II1 was printed, an extended and refined version of Metamorphose which was printed during Euwe’s reign but had not yet been influenced by the chess hype. That was different for Metamorphose II.2

We see the small Italian city of Atrani on the left, changing into a chess board with one defensive tower seamlessly morphing into a white rook on a3. The board in turn becomes a simple set of squares, which later turns back into the word ‘metamorphose’ which started the whole thing. Cities to the left, words to the right, here we are stuck in the middle with chess. Where could we possibly be better?

For once, the position is perfectly clear and unambiguous — I guess that here, too, Escher’s talent and attention to detail shows. We can say with absolute certainty that the position is the following:3 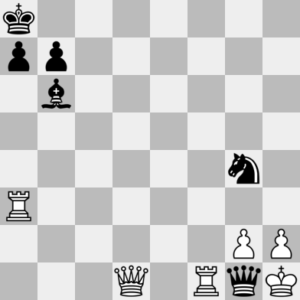 Well, that’s not strictly true. It could be that the black pawns are really on the second rank instead of on the seventh, but let’s not split hairs here. At least not about that. There are other reasons to nitpick, though.

For example, there is the considerable nit of what white’s last move could possibly have been. Black’s last move must have been Qg1+, or possibly Qxg1+. Presumably, that queen came from c5, for otherwise white would have played Rf8+. But then it is unclear why white didn’t defend against the smothered mate. After all, he has two exchanges to spare! He could give some material back. But perhaps he has aspirations for the US presidency and didn’t want to be accused of socialistic tendencies.

Realism: 4/5 This position is extremely realistic — for a puzzle. The position before black’s last move looks precisely like a very easy and very standard problem in a book of tactical puzzles. It doesn’t look much like an actual game, though. It is highly unlikely that white’s queenside pawns and black’s kingside pawns get vacuumed up so cleanly without disturbing the other side’s camp in the slightest.

Probable winner: Black can deliver checkmate on the next move.

1. [You get one chance to guess what this Dutch word means. A correct answer gives no points, a wrong answer costs a thousand.] ↩
2. [The picture given here shows only part of the work. It was taken from www.artwiki.org .] ↩
3. [Tired of crappy diagrams? Give them a metamorphosis with this tool!] ↩