This blog is, as the name suggests, about chess in pop culture. Last week, we talked about the culture part, today we’ll deal with the pop part. Because the Friday the 13th series is humongously popular. Apart from the original movie, there were nine (!) sequels, a crossover film with the Nightmare on Elm Street series, a remake, novels, comic books, video games, and an enormous amount of merchandise.1 In short: it is one of the most popular series out there. Yet, most everyone agrees that all these movies aren’t very good. I haven’t seen most of them, but I can affirm that the second one isn’t great. Still, it got chess in it! 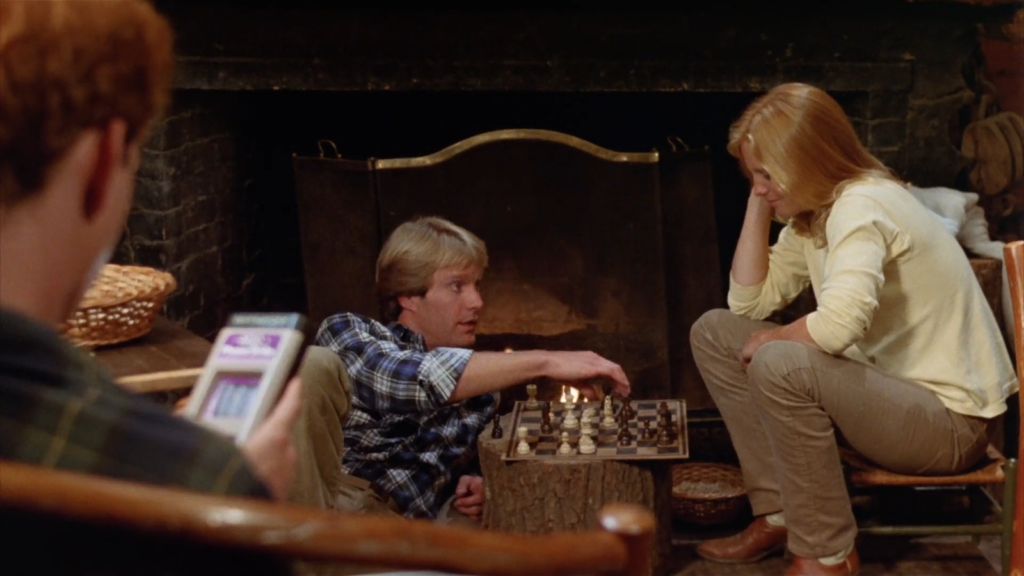 So for both of the people not familiar with how Friday the 13th movies go, here a brief synopsis of the plot for any one of them: a bunch of teenagers get together for a summer stay in Camp Crystal Lake, somewhere in the most remote of forests, where they get picked of one by one by a serial killer. Of course, before this happens, there is some socialising before the murders — and that’s when the chess happens.

Ginny and Paul, who are more or less the protagonists of the movie, are sitting around chess board. The chess board, miraculously, has been set up correctly and the position is as follows:2 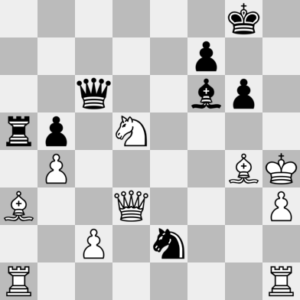 the piece on g4 is completely almost completely hidden behind white’s king, but I suspect it’s a white bishop. This is mainly based on the following dialogue:

The only piece that could be on g4 such that Qxf6 is indeed checkmate is a white bishop. Of course, I’m relying on these two players accurately identifying a checkmate and I’m not sure I can do that with any degree of confidence.

Actually, this position plays and important but often overlooked role in the movie. Most plot synopses, if they touch on the killer’s motivation at all, suggest he kills basically because he’s insane, but this is not true. Throughout the movie, it is suggested that he actually spies on the campers and he was probably peeking in through the window when this game was being played. He saw how terribly they were blaspheming against Caissa and took revenge in her name.

Realism: 3/5 It’s hard to imagine a situation like this coming about. The white king ending up on h4 is particularly puzzling, but it is also an open question why white didn’t take the knight when it arrived on e2. In short: no halfway decent player would end up in anything like the position above, but nobody claims that these are halfway decent players.

Probable winner: Ginny. Quit living in dreams. Ginny. Life is not what it seems. Such a lonely little girl in a cold, cold world. There’s someone who sees you!

1. [So far. I’m sure there will be more in the coming decades.] ↩
2. [If Jason ever threatens to kill you unless you make a decent chess diagram, I suggest this site.] ↩
3. [Strange sentence, mediocre actress!] ↩