Perhaps you have heard of a 1969 movie called The chairman? Maybe under its alternative title The most dangerous man in the world? It was by no means a success and nowadays it is perhaps best remembered for starring Gregory Peck. The screenplay for that movie was based on a novel by Jay Richard Kennedy called The chairman. This novel was translated to German and this translation was christened Schach dem Vorsitzenden, which can be loosely translated as Check to the chairman. Naturally,my interest was piqued. And that was before I saw the cover!

Unfortunately, title and cover are rather misleading. Chairman Mao makes but a very short appearance in this book and chess makes an even shorter still. If you can get over that,1 it is pretty much a standard espionage thriller with a rather elevated body count. The plot is about a synthetic enzyme which has been developed in a top secret lab in southern China. The head of the American intelligence service sends an agent to find the formula for producing this enzyme.

But let us focus on what little chess we have. On the cover, we see squares on four files and seven ranks. A small peek at the book’s spine shows the eighth rank. Assuming, for no particular reason, that we’re looking at the book from white’s right side,2 we arrive at the following reconstruction:3 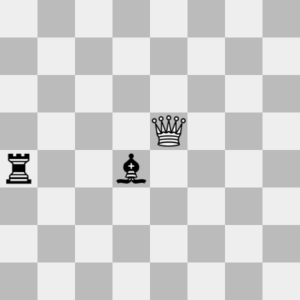 where the chairman has been assigned the travesti role of a white queen, in view of his headgear. I imagine this is not what was intended, but if he were a king he would have had a cross on his head.

Large parts of the board are cropped out, so there are probably some pieces missing. There are certainly some pieces missing, in fact, as there are no kings in the above diagram. It seems likely that this is an endgame where white has won a queen for rook and bishop and perhaps an extra pawn. Black has taken the laudable protective measure of protecting his bishop with his rook. The bishop is playing the role of the American spy, attacking Mao who is stupidly smiling into the void, not realising the threat he’s under. So despite the plot having nothing to do with chess, both title and cover fit it quite well.

Realism: ?/5 We really see too little to make a reasonable assessment of our subject’s realism. What little we do see seems accurately enough.

1. [And the disturbing stories from the author’s psychotherapy centre.] ↩
2. [After all, it’s not written from the communist perspective, so we’re definitely not looking on it from the left. Symbolism!] ↩
3. [A top secret, cutting-edge project to greatly improve the production of better diagrams was located, at great cost, here.] ↩