By: Nikolaas VerhulstPosted on March 3, 2020

By a bit of an accident, I recently stumbled upon the existence of a franchise with three different TV-series, two made-for-TV movies, a series of comic books, and three computer games — the most recent one for Windows 95. Yet I had never heard of it before. Also it’s kind of shit. In 2009, IGN named the original series the 77th best animated TV-show of all time, but how something as bland and lifeless as this gets in a list like that while the Tintin animated series doesn’t is a mystery for the ages and it is probably why God has averted his gaze from the eternal disappointment that is the human race. But perhaps I should tell you what Jonny Quest1 is about. I’s about a boy, his father — who is a greatly sough-after professor — their bodyguard, an Indian orphan named Hadji, and their dog Bandit. Together, they live through all sorts of silly adventures. 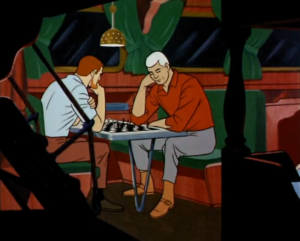 The scene above comes from the very beginning of the 19th episode of the original series. The group is on a boat wiling away the evening in the usual fashion; the children playing checkers, the adults playing chess — and the dog napping. Later on, the boat will catch fire and the whole cast will be cast in the sea. The adults will be picked up by a boat and spend the rest of the episode looking for the children who end up stranded on a deserted island. Deserted up to some simian locals, that is. Presumably, these are the tree people from the episode’s title, but at no point in the show do they actually attack.

However, everything after the very beginning of the episode is devoid of chess and can therefore safely be discarded. That’s good, because it’s hard enough to see what’s going on in the one still shot shown above. My best attempt at a reconstruction is very bad and as follows:2 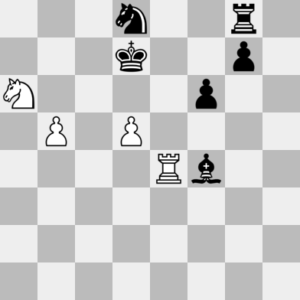 As you can see, the white king is missing; it is probably hidden behind professor Benson’s arm. The fact that a large part of the board is obscured like this makes it hard to judge the realism of the position portrayed. The placement of the black rook on g8 seems suspicious, but everything else seems more or less reasonable. The knight was probably pushed back by the advance of the white pawns.

But, really, we need a better view of the board. Maybe an idea for the next quest?

Realism: 3/5 That is, as mentioned above, a very preliminary number, but it’ll have to do.

Probable winner: Again, hard to say with such a large part of the board not shown, but it certainly seems that white has by far the best chances.

1. [Perhaps this is my obsession for chess history showing, but that name immediately reminded me of Johan Quist.] ↩
2. [This site can help you make a nice diagram. It cannot help you with finding zeugmata, though.] ↩