By: Nikolaas VerhulstPosted on April 2, 2019

It is relatively common to see chess in commercials, but it’s very rare indeed to see correspondence chess make an appearance. And the last place I would expect it, is in a commercial from I think the nillies. For a soft drink, of all things. Yet this is precisely what happened in the 7up1 commercial we’re talking about today. The plot of the ad is that there are two guys on tropical beaches, presumably some distance apart from each other, that are playing postal chess via message in a bottle. A 7up bottle of course. I have not the faintest shimmer of a sparkle of an idea as to how this is supposed to entice people to drink 7up. The bottle they send to each other, thanks to oddly reliable ocean currents , doesn’t even contain 7up. But we should focus on the chess, like this guy: 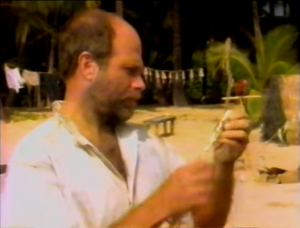 This poor guy has constructed a makeshift chessboard out of green and white – the latter presumably dried – palm leaves and has populated it with rudimentary chess pieces made of shells, dried starfish, and dried seahorses. This makes identifying pieces and their colours extremely hard. The only help I had is the fact that the moves one the note visible in the above picture says QUEEN TAKES PAWN – CHECK! and that this move is executed on the board. Unfortunately, that was not enough. 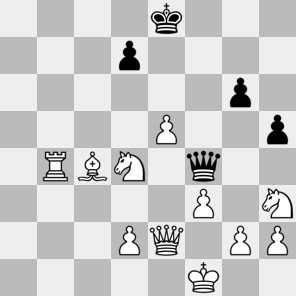 but about half of the board is never on screen and has therefore been left empty.

Of course, even the portion of the board of which I’m reasonably sure my reconstruction is correct, mainly white’s kingside, makes very little sense. It is strange that there are very few black pieces, but it would be even weirder if, say, the knights on c4 and h3 were black. Also the immobility of both d-pawn until deep into the middlegame seems kind of weird. Of course, no matter how strange the position is, black’s Qxf3+ is even stranger.

Realism: 2/5 One point because it’s a legal position and one more because I could perhaps see something not entirely unlike this occurring in a game where one side is too stupid to resign and the other has lost interest and is just pushing some pieces out of courtesy. But these values are, of course, nothing more than very rough approximations for those of the actual position.

Probable winner: White. Unless the ocean currents prove unreliable and he loses on time.