No, I did not just have a stroke. There is a far more sinister reason for the weird title: K-pop! Yes, K-pop – the word that strikes fear in the hearts of men! Okay, maybe that’s not quite right. Maybe I should say K-pop – the word that strikes confusion in the hearts of men. Either because they don’t know what it means, or because they do know and are utterly baffled by its existence. For the blissfully unaware among you: K-pop is basically Korean pop music1 and also utterly incomprehensible. For one thing, there’s barely even the pretence that K-pop is about music; the visuals in the accompanying video and the choreography are much more important, which is probably why boy bands and girl groups dominate the scene. Another idiosyncrasy of the genre seems to be that the title of every song must be either English or gibberish. Today’s subjects chose the latter. 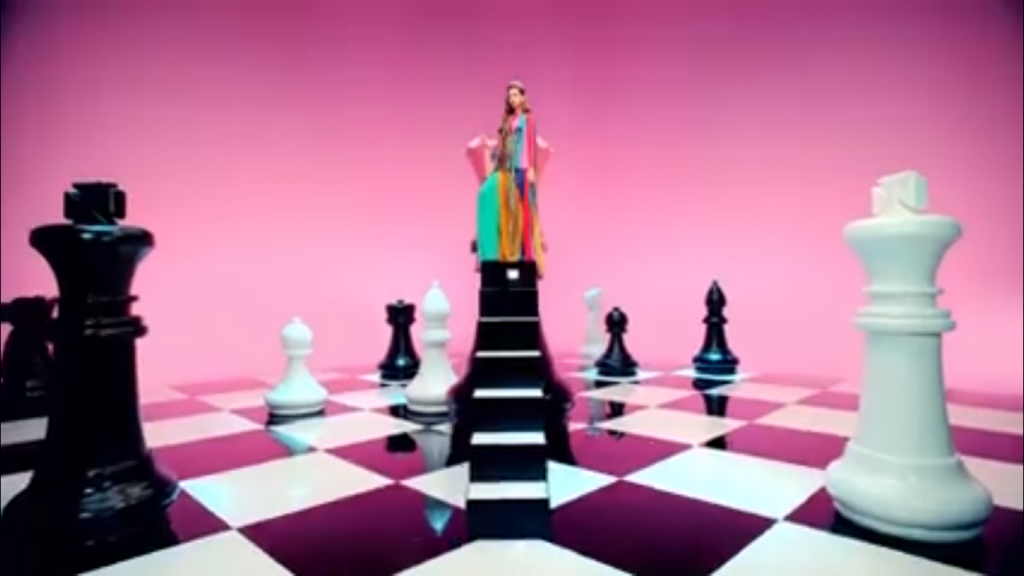 Some few seconds into the official music video, we are treated to the image above. As far as I have been able to ascertain,2 there is no material in the text even vaguely connected to chess. Instead, the imagery of the black queen, which is the strongest piece on the board, is probably supposed to convey the idea that the singers are strong, dangerous women.3 But this kind of symbolism is of no interest here; only the actual position on the board matters.

The board has been set up correctly, which is perhaps a testament to the fact that, typically, some fifty bazillion people are involved in the production of a K-pop music video. The position is without a shred of doubt the following:4 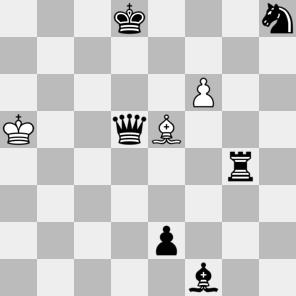 This is not the least plausible position I’ve ever talked about, but it’s not going to win any prizes either. The main problem is that, with such a huge material deficit, white should have been mated ages ago. How and why black’s knight ended up on h8 is also something of a mystery. But things take a turn for the absurd.

Of course, any reasonable person will assume white is to move in the above diagram. He’s in check, for God’s sake! But such is apparently not the case, because we get to see a normal-sized board with the same position in which one of the dancers takes the black queen in her hand – and takes the white king with it! Immediately, the image of the group as strong and imposing characters is torpedoed, as they found the one way you can actually lose this position: making an illegal move. Then again, if they’re playing a classical game they will be fine, so perhaps they’re just being arseholes.

Realism: 3/5 It’s not utterly ridiculous, which unfortunately is enough for a passing grade.

Probable winner: Whoever is playing white, if it’s a rapid game and he has the wits to make a claim, black otherwise.

1. [South Korean pop music to be precise, but I guess that’s given.]↩
2. [Which is not very far. Unfortunately, I know about as much about Korean as a scorpion knows about canoes. I had to resort to a translation, which, if correct, unmasks the text as hilarious nonsense with a slight sprinkling of stupid. I am especially amused by BLΛƆKPIИK bragging that they have twice the usual density.]↩
3. [Instead of malnourished, underpaid underlings.]↩
4. [Produced by a highly qualified team of experts.]↩