When we last visited New York exactly four weeks ago, a duck-voiced serial killer was wandering the streets of the big apple, strewing mutilated women’s bodies in rivers and apartments. This time, terrorism casts its lugubrious shadow over the East coast. The movie focuses on Omar who arrived from India to study some unspecified topic at the New York State University, because if he can make it there he can make it anywhere. On his first day, he meets Sam – who will become both a good friend of his and an important plot point – and plays a games of chess with him. At this point, everything is still sunny and, as this is after all a Bollywood movie, a song inevitably breaks out.

Sam, the guy on the left, apparently thinks quite highly of his own chess playing skills and has a challenge open that no-one can beat him. Right before the stillshot above was taken, he managed to mate some random dude and offers him to take three moves back and continue from there. When his opponent refuses, he asks whether someone else is interested and Omar takes him up on the offer.

What the exact position is, is not so clear. We get a very clear top-down view of the board at some point, but it’s hard to identify pieces from the top and the fact that some moves are taken back does not make the reconstruction any easier. I think the position with three moves taken back is the following; but this is far from certain:1 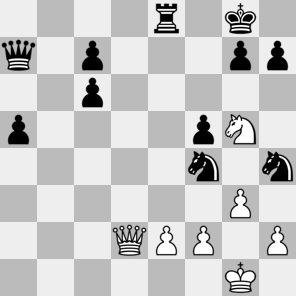 Realism: 3/5 The constellation of knights on the king’s side seems very unlikely to occur in practice. Also, black’s queen position seems very strange.

Probable winner: Omar, who has found his mate.

1. [But it’s certainly made with this diagram editor.]↩