Judging the quality of entertainment is an age-old tradition – probably about half an hour younger than entertainment itself – but it, like so many things, has been profoundly changed by the internet. When people read Hanslick’s review of Lohengrin, they were trying to find out whether it was worth a watch. Nowadays, there are so many people reviewing so many things – and people are interested in them because they are (supposed to be) funny. One of the more popular ones is Brad Jones, who, under the moniker the cinema snob, talks about obscure horror movies, mockbusters, and porn parodies. In one of the latter ones, the title of which I see no reason to repeat, the cinema snob is interrupted by a pedantic know-it-all. Of course, being a pedantic know-it-all, he has a chess board at hand. 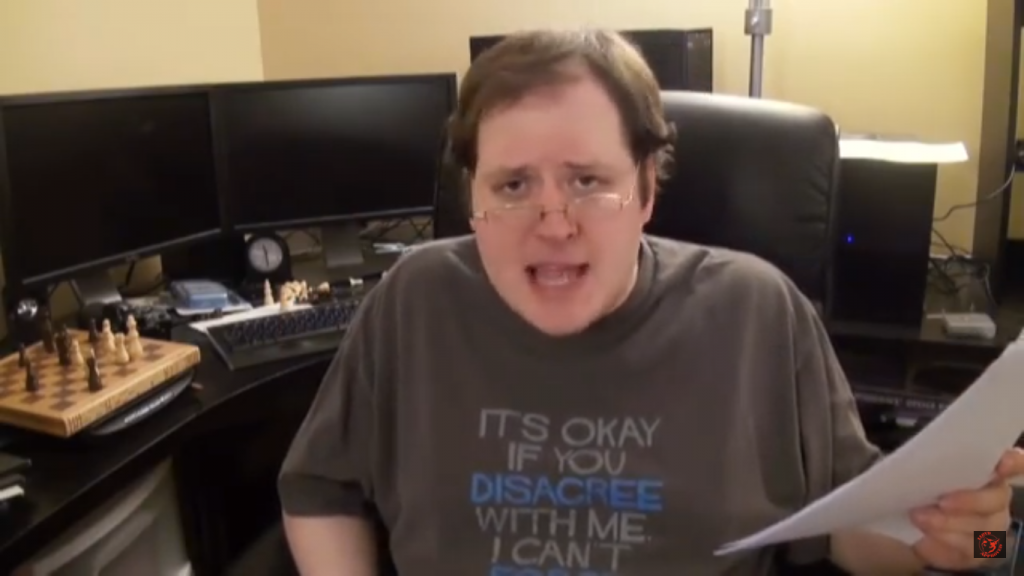 In universe, this guy is called Actual Lee1. He is played by Lewis Lovhaug, who has a similar webseries wherein he talks about really bad American superhero comics, of which there seems to be no smaller abundance than of bad representations of chess in popular media.

I’d like to draw attention to the remarkable thickness of the wood. I could understand this if it were one of those boxes which you can fold open to make a board but which have to house the pieces when closed, but I see no trace of a hinge. Maybe it’s one of those fancy boards with a drawer to keep the pieces in. Or maybe there is a hinge and my eyesight – or possibly the resolution – isn’t good enough.

But all of this is immaterial. We only care about the chess. The position is fairly easy to reconstruct. Te only thing I’m not confident about is the piece on b4. I think it is a knight which is turned towards the camera,2 but it might also be a bishop. Assuming I’m right – which is a daring assumption – the position is the following:3 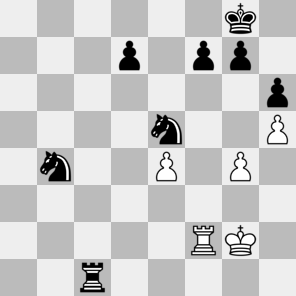 How did this come about? I don’t mean the fact that white is missing a pair of knights, I mean what on earth was the opening? In what opening does black push neither his d- nor his g-pawn? Queen’s Indian maybe? But even there, black usually pushes at least d6 to increase control over e5 and c5.

And white usually doesn’t push his pawn to h5. That’s more of a Caro-Kann thing. Although, lately, everyone seems to be pushing his kingside pawns. Maybe it’s me. Maybe I’m out of touch. But probably it’s the kids that are wrong.

Realism: 2/5 The position is not so ridiculous that’s it’s hard to reach, so I guess that’s something.

Probable winner: Black. Without his two knights, we would have a very interesting endgame with some winning chances for black. With the knights, it’s going to be boring.

1. [Yes, real Lee.]↩
2. [Thereby breaking the fourth wall, which might be a very clever joke. Or a coincidence.]↩
3. [Actually, this diagram was made made with the renowned Apronus chess diagram editor.]↩