CIPC #64: Back to the future part III

This is going to be a huge disappointment. Just imagine: for more than a year, my fans1 have been waiting, silently fearing my blog would die before I’d get there, getting more excited the last weeks as the date was creeping nearer, and now it’s finally there: the 64th episode! The number of squares on the board! Fischer’s age when he died! There must be some special instalment! Nope. Nada. Zilch. Not one of the big ones everyone was waiting for, nothing deliciously obscure. Just a big ol’ dud. We’re focusing on a board which appeared in a scene of the third movie in the ostentatiously eighties Back to the future series. 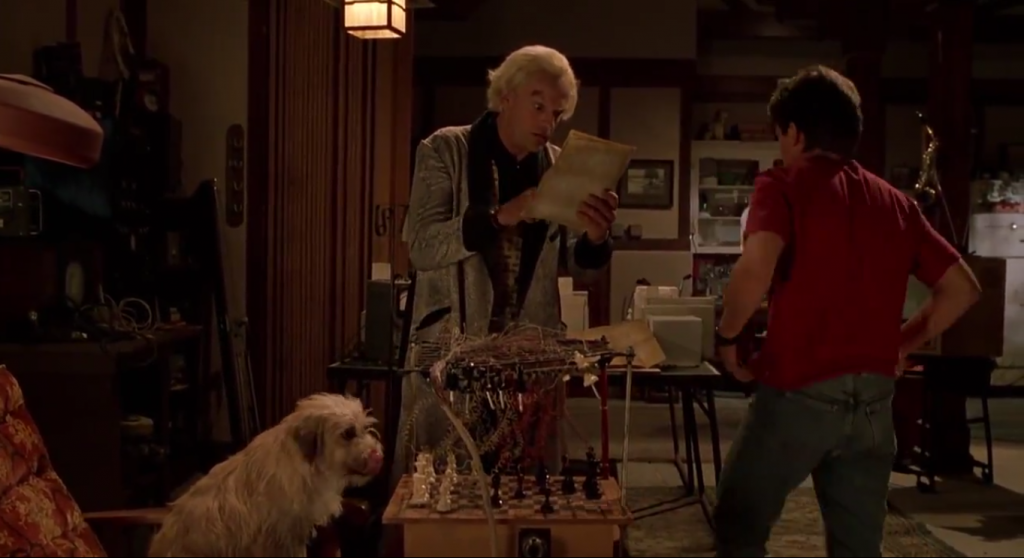 Doc Brown2 (Christopher Lloyd) is giving the necessary plot exposition and to keep the audience’s interest, Marty McFly (Michael Fox) is messing around with all kind of stuff in the Doc’s lab. Amongst others with a chess board, where Copernicus, Doc’s dog, is patiently waiting for someone to take up the gauntlet. And Marty does. In fact, in the image above he has just played Bg4. Unfortunately, we don’t get to see the remainder of the game – if it exists at all – so I can only focus on this one position. And even that I cannot really reconstruct.

The chess board appears only very briefly once or twice as a small part of a big scene. It appears very clearly in one shot, but there only the white pieces can be seen. All in all, after a lot of repair with some tools that were not yet invented in 1990, the best I can come up with is the following. And I’m not sure it’ll fly.3 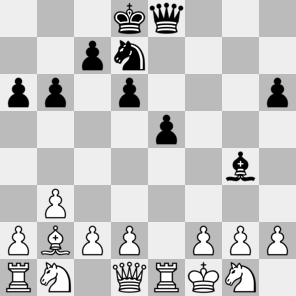 I’m pretty sure about black’s kingside and white’s pieces, except that maybe, possibly there is a pawn on e4, but I think not.4 What on earth happened to bring about this position is a mystery, which Copernicus can be seen contemplating in the still shot above. Unfortunately, only the knights move along an ellipse, so he can’t make heads nor tails of the other pieces.

Nor can I, by the way. How did white’s king and rook end up on f1 and e1? Did he castle long on the kingside? What brought the knight back to g1? Did black start with his royalty in the wrong place or what? To understand the position, we’d have to go back in time and ask the director. But that’s from a different movie.

Realism: 2/5 White’s queenside looks rather normal, but some points are immediately subtracted again for what’s happening on the kingside.

Probable winner: Copernicus. He’s up half of his pieces and a couple of paws.