The history of the world chess championship is filled with scandals. Delicious, delicious scandals. Some of the more famous ones are the yoghurt incident (Karpow vs. Korchnoi, Baguio 1978), the famous 1993 split (Kasparow vs. Short, London 1993), and the bathroom controversy (Kramnik vs. Topalov, Elista 2006). Less well-known is that there has been an actual incident of violence. Not between the players, but between one of them and the arbiter. This happened quite a while ago in a match between Garry Kimovich Katsparow and Anatoly Yevgenyevich Karpaw. Here’s the footage:

History keeps quiet about the exact reason for this conflict, but the most probable cause is the utterly inexcusable disarray in which the pieces are left on the board. We can see the arbiter look around in dismay, locate the probable culprit, and jump into action, taking revenge for the terrible state his board has been left in.

Indeed, it is quite hard to reconstruct the exact position, but my best guess is the following:1 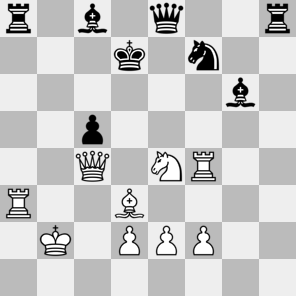 This tabiya is the natural result of the Sofa variation, which was famously popularised in this match. One historical inaccuracy, though: the arbiter in the 1987 match was not, as the .gif would suggest, Azmaiparashvili.

Realism: 5/5 That this is indeed a standard position, can be clearly seen from Karpaw’s bored facial expression.

Probable winner: On the board, Katsparow won.

1. [Made with a chuckle, because Alva lost his glasses.]↩