Among literary magazines, the New Yorker takes pride of place, counting authors like Roald Dahl, Haruki Murakami, and Vladimir Nabokov under its contributors. On top of that, it’s the source of the expression “back to the drawing board”. This all sounds very promising. Maybe they, of all media, might be able to represent chess well? Maybe, but they also published Salinger’s work, so it might just as well be a disaster. Let’s have a look at the cover of the August 30, 1976 issue (cover art by by James Stevenson) to settle the question: 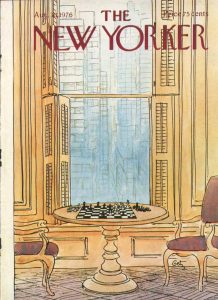 The scene seems to be set in New York, which is not very surprising, somewhere in a skyscraper. I have no idea whether there is a story to go along with the picture but, if so, I have not been able to unearth it. There is also no clock, suggesting that what we see is either the result of a friendly game or that someone was analysing. I lean towards the second explanation, since only one of the chairs is pushed back, suggesting only it was occupied.

But all of this is, of course, just filler. What we’re really interested in, is the position on the board. The view of the board is perfectly clear, and the position is without a shred of doubt the following:1 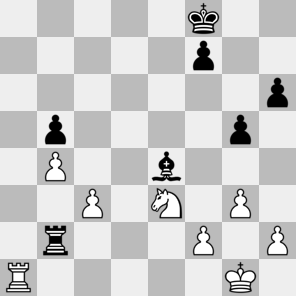 Well, colour me impressed! That looks like a very reasonable position. Black is a pawn down, but he has the bishop, his pieces are more active and white’s c-pawn is dreadfully weak, which should give enough compensation. The ratio of pawns to pieces seems very normal. White’s kingside pawns are undoubtedly the result of a fianchetto. Probably, white had to give up his light-squared bishop in order to get his extra pawn.

In fact, it very much looks like the artist might have used an actual game as a model.2 The position doesn’t look familiar to me, so it’s probably not from a book full of classics – all the more so because nothing exciting is going to happen here. This leaves us with two plausible scenarios: either it’s from a game the artist (saw being) played himself or it is from a game which was  topical in 1976. Can we find this model?3 In the former case, it’s probably hopeless, but maybe there’s someone out there with a very large database of games from the seventies? Can anyone help?

Realism: 5/5 This position looks more realistic than what I usually play, so I feel morally obliged to give full marks.

Probable winner: Nobody. Of course, white can try to convert his material advantage, but I feel that a draw is the natural result here.

PS: A reader with either a better memory or a better database has alerted me to the fact that this is clearly the second game between Fischer and Spassky from the second Piatigorsky cup. After black’s 30th move, to be precise.