CIPC #24: Midsomer murders S4 E5 The sleeper under the hill

Maybe we should let the nectar of nostalgia linger just a little while longer. Maybe we should revisit another old friend: DCI Barnaby from Midsomer murders. In this episode, he’s investigating what appears to be a ritual murder in the local Stonehenge rip-off. But that’s not the reason I picked this particular episode. Nor did I pick it because I get to recycle the opening line from the last post.1 No, I choose this episode because it showcases a travesty which hitherto has escaped the whips and scorns of my avenging keyboard. Barnaby is talking with a possible suspect about local history. During the conversation, the latter makes a move on a chess board on his table. Here it is: 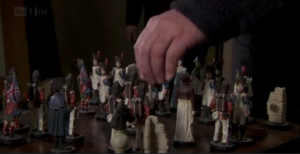 Really? Napoleon-themed pieces? Why do people do this? Whoever plays with these ridiculous pieces? What’s wrong with the familiar Staunton set? All these fancy Star Wars, Lord of the Rings, or in this case Napoleon sets are nothing but distracting. You’re not going to play Warhammer 40K with pawns and rooks. Why would you do the opposite? There is an obvious answer of course: to obfuscate the position and thereby to avoid being the subject of a CIPC post. I can see right through their little plot – but it won’t fly! I refuse to give in!

So here it is, my best attempt at neutralising this anti-blogging ploy, my best reconstruction of the position, my best defence of proper representation of chess in popular culture:2 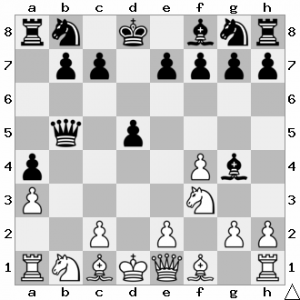 Black’s kingside could look completely different, though, and white still has the d-pawn in his hand, but this is the gist of it – and what a gist it is. Just like last, week the kings and queen have traded places, but many more unsavoury things have happened here. Black has mindlessly pushed his a-pawn forwards on a pointless quest to nowhere, both sides have severely neglected development, somehow white lost his b-pawn, and – worst of all – white seems to have played Bird’s opening.

Hah! That’ll teach’em! It takes more than weird pieces to safeguard against the righteous wrath of a belligerent blogger with a nefarious knack for annoying alliteration.

Realism: 3/5 Maybe, maybe this position could occur in a game between weak players who have set up the board incorrectly. Unfortunately, that’s quite an accomplishment given the standards I usual have to deal with.

Probable winner: Since Mr. Singer is playing against himself, he will probable manage to win.

PS: Remember how I wrote about the promofilm of the Antwerp chess league? They’re organising the Belgian championship this year, and I think you should have a look at the picture the official site. Once more there is a pawn which necessarily must be on either the 1st or 8th rank. Maybe this is some weird house style?