By: Nikolaas VerhulstPosted on September 14, 2021

Perhaps I have been indoctrinated by Pepsi, but to me Ava Max sounds like some kind of soda. Or perhaps like some obscure British sports car from the seventies. But it does not sound like a person. Possibly because it isn’t. It just happens to be the name under which certain music-adjacent sound files featuring vocals by a certain Amanda Koci are published. Some of said files have found an appreciative public and were accompanied by short cinematic efforts, which also found wide distribution.1 In one of those, entitled Kings & Queens, the following scene occurs:

The videography seems to be not so much focussed on the board but rather on the blue-haired woman that has invaded it. As a consequence and despite the very high resolution of the video, it is hard to make a decent reconstruction of the position. The fact that they use weirdly elongated pieces is no great help. Nor is the fact that they seems to have made the classical mistake of rotating the board π/2 radians.2

This is the best I can do:3 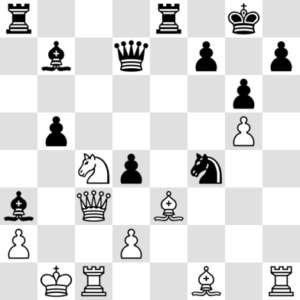 If it is also the best they can do, there’s something massively wrong with them. Let’s get the few good things there are to say about this position out of the way first: there are indeed kings and queens on the board, which justifies the title, and black’s king’s side looks very normal. On the other hand, it seems like someone did not know how to castle queenside and it also seems someone decided to throw some pieces randomly in the centre.

But the worst is yet to come. There’s text.

Lyrics, especially in pop music, tend to be awful — and this is no exception.

Koci (aka Max): In chess, the king can move one space at a time but queens are free to go wherever they like.

Not in one move! And if multiple moves are allowed, then the king, too, can go wherever he likes. Or is the point that the king cannot move into check, while the queen is free to offer herself up for capturing? What is the message here? “Hey, ladies, you can sacrifice yourselves!”? Or is the “wherever they like” meant literally and is it “Hey, cheat at chess!”? That would be even worse.

Are we sure this song is legal?

Realism: 2/5 I’m kind of annoyed that the position is not illegal — that would have made it easier to give a score. In the end I decided to give a 2 because every piece individually is in a more or less logical position and because I’m not at all sure of my reconstruction, but I feel that a 1 would be defensible as well.

Probable winner: It’s an incredibly sharp position, but it seems black is winning. Three white pieces are currently under attack, and it seems like the white king is also weaker.

1. [That’s an understatement. Apparently, more than a million copies of this particular file have been sold.]↩
2. [Yes, we use radians. This is a serious blog.]↩
3. [With kings & queens by Apronus..]↩