Ex oriente lux. Also, really weird pop music. In Europe, one mainly hears about k-pop, the Korean pop music which has been taking the world by storm the last couple of years. In fact, I have talked about k-pop before on this blog. But there is also j-pop and even c-pop, although I don’t think it is usually called that. Apparently, one of the stars of the nineties in the latter genre was a certain Andy Lau. He started his career as an actor but then became a pop star too. It seems like he is a massively famous and popular person — I just hadn’t heard of him before. 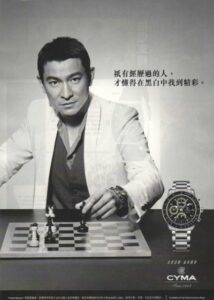 Here he is at a chessboard, advertising1 for a brand of watches I have also never heard of but which might very well be big in China, too. I don’t know when exactly this advertisement was made, but I suspect it cannot be too old, for the popularity of chess in China is a relatively recent phenomenon. In fact, the first appearance of a Chinese team in the chess olympiads was only in 1978.2

But let’s get to the meat of the matter — des Pudels Kern, I am tempted to say, but the juxtaposition of these two expressions with our subject conjures up all sorts of unpleasant stereotypes. Let’s quickly skim over this awkwardness and get to the position. We get a very clear shot of it and, shock of shocks, h1 is a white square! Hallelujah!3 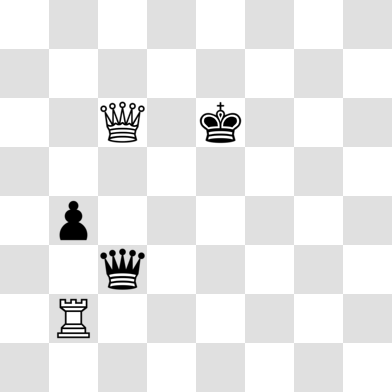 There are no coordinates on the board, but as Lau is playing black we can safely assume that the eighth rank is on his side. Not that it matters, really, because the position is anyway illegal: there is no white king!

My first impression was that Mr. Lau was in the process of making a blunder: he holds his king, so he has to move it out of check, instead of just winning white’s queen with Qxc6. However, I’m not sure it actually is a blunder. Sure, he could have gotten a queen versus rook endgame, but he could never win it as there is no white king to mate. It also seems that not taking the queen doesn’t lose; after all, black can even give his queen for the rook and not lose.

Probable winner: Nobody. One side can’t be mated and the other won’t be.