In the more than two years I have been discussing chess in popular culture on this blog, I have seen the most horrible atrocities being committed against the noble game of chess. I have seen wrongly set-up boards. I have heard unintelligible pretend chess babble. I have seen illegal positions, illegal moves, even wrong boards. But I have never, never, never seen something quite as horrible as our subject for today. Today we take on the smurfs again. In the eleventh volume of the comic series in the middle of the sixth page,1 we are confronted by the following gruesome image: 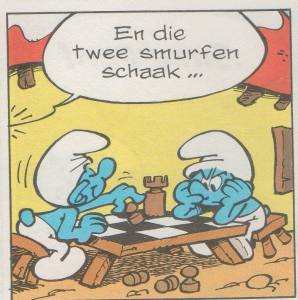 The story of the book is centred on Hefty Smurf, who is complaining to Papa Smurf that the other smurfs are not interested in sports whatsoever. As an example, he shows one smurf fishing lazily in the shadow of a parasol, some playing darts, and the above picture:

Now, the word smurf is of course used for pretty much everything in these stories, bu from the context we can conclude that here it means something like corrupt, make a mockery of, massacre, or something like that. The position on the board is as follows:2

and it is without a doubt the single worst thing I have ever talked about on this blog. The board is only 3-by-4, there are only pieces of one colour – white or black, I don’t even know which -, there is no king on the board, and whoever is playing seems to be finishing a move by pushing a pawn to the second rank – which is, of course, impossible.

Even worse, the captured pieces are just thrown on the ground. And they, too, all have the same colour! This means that one side started with at least four pawns and a rook, which together occupy almost half of the board. No wonder the other guy has no pieces: there’s no room for them!

Probable winner: I haven’t got the foggiest idea. How would you even determine the winner if one player has no pieces?

1. [Well, the second if we ignore the front matter. It is a strange coincidence that the two times (as far as I know) chess occurs in The smurfs is in two successive volumes.] ↩
2. [You can smurf your own diagram here.] ↩