Originally, this was planned to be a sequel to last week’s post. I was going to dissect another slightly less obscure 19th century German painting. I had an even lower quality picture and everything – but then I found out that today’s subject is actually not that obscure! The painter, Johann Erdmann Hummel, has his own Wikipedia page in six different languages.1 On the English version, there is even a picture of the Schachpartie im Palais Voss which is reproduced below. For a moment, I was happy that I didn’t have to resort to another crappy mobile phone picture. Then I realised that something more intriguing was going on. 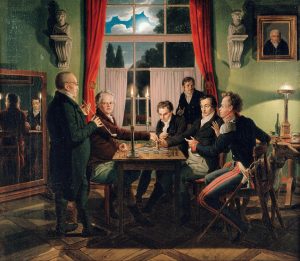 In this image, there is only one piece on the board. I believe it is a white king, which is currently standing on d7 but is about to be toppled over by the baby-faced dude in the brown jacket (who is apparently Aloys Hirt). Now, at the time of writing, the German Wikipedia gives the caption Schachpartie im Palais Voss, which is correct, and the text right next to it claims that Schachpartie im Palais Voss is on exhibition in the Niedersächsisches Landesmuseum, which is also correct, but the image above does not come from that museum!

Apparently, Hummel, like many other painters, made different versions of the same painting. The main differences between the above version, which is housed in Alte Nationalgalerie in Berlin, and the one in Hannover are the wand decorations on the right, the portrait being replaced there by a large mirror – and the actual position on the board. In fact, the position in Hannover makes more sense. Here it is:2 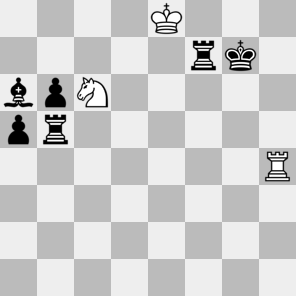 This is a position which one could actually encounter and one might even analyse for a moment or two, just to see if white has any chance of survival in the endgame after he wins back a rook with Rg4+.3

The difference in the position on the board lends credence to the theory that the version on display in Berlin is a study, for which Humel did not find it important to come up with a reasonable position and just used a dummy instead.

Realism: 4/5 At least for the Hanoover version. I can see a position like the one above occur in an amateur game between average 19th century coffeehouse players – and that’s exactly what this is supposed to be.

Probable winner: Black, i.e. Friedrich Bury. He has a rook, a bishop, and two pawns for one measly knight.

1. [Meanwhile, both me and my website are at zero! It’s like you have to do something noteworthy to get a Wikipedia page. But that can’t be true either, so I’m stumped.] ↩
2. [Schachpartie im Palais Voss, Berlin by Apronus.] ↩
3. [He doesn’t.] ↩