By: Nikolaas VerhulstPosted on September 19, 2017

Age of Empires II was in its heydays the most popular real-time strategy game in the world and this popularity has lasted. The original game was released in 1999, but as recent as December 2016 a new expansion pack came out and a remastered definitive1 edition has been announced. Millions of players all over the world have been attracted by the widely different but well-balanced unit trees, the easy to understand but difficult to master gameplay, the careful crafted solo missions, and the worldwide multiplayer mode. One player2 has been attracted by the opening cut scene of the game, wherein we see two kings playing chess. 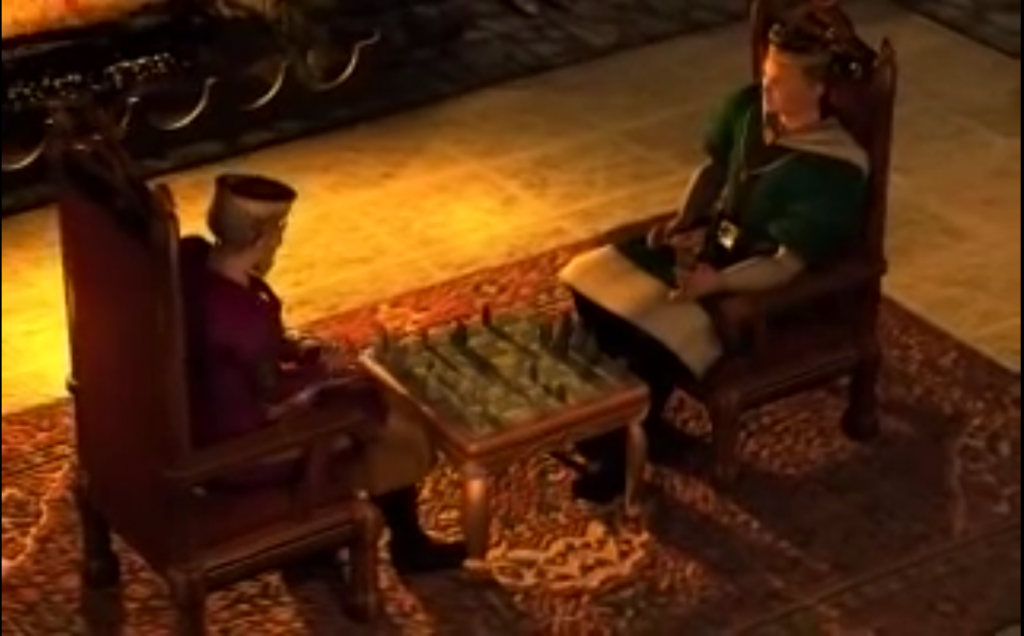 Back in 1999, these graphics were so impressive, but I must admit I’m pretty frustrated by the pixelisation. If the resolution were a bit better, I might have been able to reconstruct the whole position from the image above, but no, it had to be blurry. Which means that I had to scan through the game’s intro looking for better view, now from white’s king side, then from the centre, computing which square is which in a partial view of the board, and trying to identify which weird shape represents which piece. The last part became considerably easier once I realised that the design of the pieces is obviously inspired by the Lewis chessmen.

Once so far, I was able to puzzle together all these glimpses into one consistent picture, which I converted3 to the .png image below: 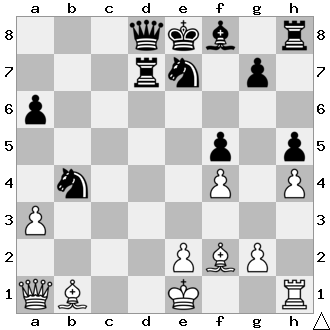 What. Is that. Why is white’s queen on a1? Where is the rook? How did his bishops get so displaced?4 Notice that the white’s light-squared bishop must be a promoted piece and that the original one must have been taken on f1. Why is black’s knight nervously shuffling on b4, innocently whistling, hoping against hope that the a3 pawn doesn’t notice him.  And why are the f- and h-pawns where they are? Did they play Ströbeck chess? And it doesn’t get any better.

You can play over what happened on the bottom of this post and I promise you it’s worth a look. White plays e3. It’s a silly move, but whatever; white is lost anyway. Black answers with Ng6. That, too, is quite silly, but whatever; black has won anyway. White goes e4, which prompts the inconceivable Rd6. White continues his pointless quest with e5 but is stopped by Nxe5. Apparently, this confuses white so much that he plays the highly dopey Bg3. But he runs into Rd2, so he takes the rook!

I don’t know whether I should be pissed off by this, or really impressed. Obviously, the queen protects the rook, making Kxe2 an illegal move. But in the olden days, when the freshness of youth still coloured the cheeks of the world, the queen was a much weaker piece, being only able to move one square diagonally. This would also explain why white plays e3 and e4 instead of the immediate e4. Hurray, the makers of Age of Empires II have redeemed themselves and obscure chess-historical knowledge wins the day!

Not quite. You see, the queen was not the only piece that moved differently in medieval times. The bishop, too, was much more restricted: it could only move exactly two squares diagonally. Consequently, in medieval chess, white’s last move was legal but his penultimate one was not.5 Zounds.6

Probable winner: After black has lost its rook, I’m not so sure any more. All the more because I don’t have a good feeling for what which pieces are worth in medieval chess – and nor does my chess engine. Black still has his knights, which I guess should be enough.

1. [Yeah, “definitive”, I’ll believe that when hell freezes over and Satan bakes waffles for his inmates.]↩
2. [That’s only a lower bound, but I suspect it’s a pretty sharp one.]↩
3. [WOLOLO!]↩
4. [The recusancy acts, probably.]↩
5. [Of course, if they are playing medieval chess, the queen on a1 must also be a promoted piece, but this is not impossible.]↩
6. [A word with a surprisingly bloody etymology, by the way.]↩