By: Nikolaas VerhulstPosted on August 8, 2017

Halt! Stop the presses! I have found what could be the most awesome thing ever! So there’s this Russian guy, you see, and he makes sculptures. That in and of itself would be scant justification for my rather bold claim, but he’s not just any old sculptor: he’s a micro-sculptor. He sculpts a convoy of camels that can parade right through the eye of needle. He makes a book which he displays on half a poppy seed. And he sculpts an entire chess table out of a walnut shell.1 From what I understand, the set has been in an exhibition of Aniskin’s work with the pieces in the position shown below. If you look at the picture it might not seem like much, until you realise that the dark brown blob on the left is the head of a match. 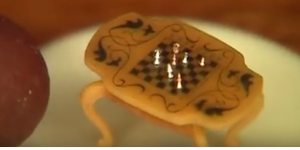 In normal circumstances, I’d complain about the fact that the pieces are once more not the standard Stauntons, but I feel that would be unwarranted snark in this case. You deserve some lenience if you’re making pieces which are less than a millimetre long.

Unfortunately, I’m still stuck with the task of identifying which pieces are which – and I’m not completely sure I succeeded. I’m pretty sure the smallest pieces are the pawns, and since there is only one piece both sides have, that must be the king, but the piece on g5 might just as well be a bishop. The biggest problem is that I don’t know whether white is supposed to be playing with the gold or the silver pieces. Given the position of the pawns, I presume it is gold, which assumption leads to this position:2 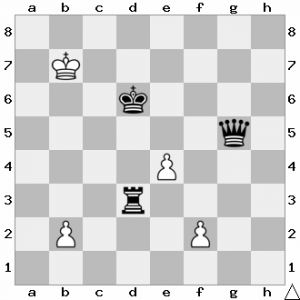 The positions suggest to me that black has caught his prey and is just toying with it a bit. He has a mat in either three or four moves, depending on whose move it is. Apart from that, the positions seems at least reasonable.

But all this ignores the most interesting aspect’s of the whole thing: who’s playing? Is it post-potion Alice?3 Some Lilliputian? Danny DeVito? Of what possible use could such a small chess board be to anyone? None at all, is probably the right answer, but the best things in life – like chess – have a tendency to be useless.

Realism: 3/5 White has played on for far too long, but these things happen. I docked another point because of the weird positions of the surviving pawns, but the end result is still not too bad.

Probable winner: Black. A rook and a queen – that should suffice.