I am quite used to it and hardly notice any more, but Mystery Science Theater 3000 is a really weird show. The premise is that a mad scientist shoots some random guy named Mike into space just to make him watch bad movies. How they make him watch them remains unclear. There is only a very confusing mention in the theme of the protagonist using the parts that let him control when the movie starts to make himself some robot companions. Why they want to make him watch bad movies remains unclear, too. There is a claim that it’s to see how much pain he can withstand, but that cannot be: he gets to play chess!

There are short interruptions throughout the movies in which Mike and his two robot friends play short sketches. In this particular one, Mike and Tom Servo are enjoying a game of chess while Crow is reading a comic. It is a nice, quiet moment which gets rudely interrupted by a bunch of space teenagers having a loud party.1

What the exact position is on the board remains unclear. We get one unsharp shot of the board and one which is sharp but in which quite some pieces, especially on the queen’s side, have been upset. I think the position is almost but not quite entirely unlike this:2,3 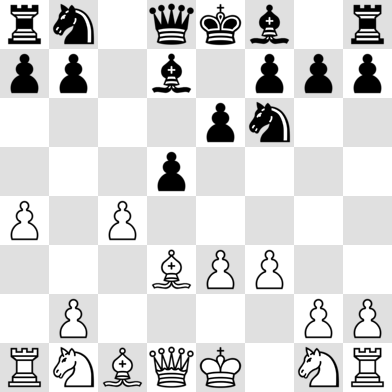 Except that h1 is a black square.4 Heh, that’s been a while, hasn’t it? I don’t know why, but it seems like we haven’t had a good old 90° rotated board in forever.

Mike, who apparently has white, has just played a4 here. Why remains unclear. And there is very little else I can say about this. Why I choose it for a blog post remains unclear.

Realism: 3/5 I can hardly give a reasonable grade here, as the position is mostly conjectural.

Probable winner: Impossible to say. Hardly anything seems to have happened. We know that both players have lost one pawn each, but very little else.