When we talk about TV series on this blog, someone has usually been murdered. There is probably a cop in a foul mood around, accompanied by a younger assistant who’s learning the ropes. Often there’s a doctor who is rather blasé about all the corpses he dissects. In short, the atmosphere is rather macabre. I thought it was time for a nice change of pace, whence today’s subject. Family ties1 is an eighties comedy series that aired on NBC about two ex-hippies and their three children. This episode is about Mallory, the middle child, and her crush on Jeff who is tutoring her in French.

.More relevant to our interest is that the dad of the family is playing a game of chess against his son Alex, who is much better than him and played by Michael Fox. Alex opens with 1.e4. His dad takes hours and hours to decide he will answer 1. … e5, only to be met by the immediate reply 2. Na3. Yes, 2. Na3. Either these guys have no idea what they’re doing, or Alex has thinly veiled contempt for his dad.

Unfortunately, the director shows a frankly worrying obsession for the romance plot and neglects the chess almost completely in its favour. When we finally see the game again, the position is as follows:2 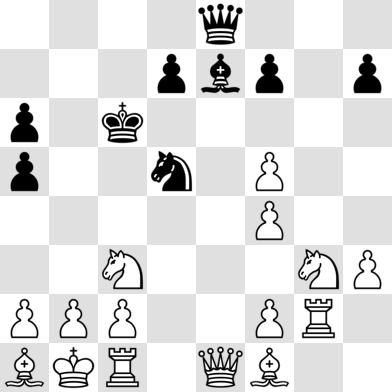 Maybe Alex is not a better player than his dad, but just a better cheater: there is no way the bishop on a1 could have gotten there legally. Whatever the case, black has been shedding material left and right without being able to take even a single white pawn. After another very long think, black plays the staggeringly stupid Bb4, which is immediately met by Qxe8.Okay, so maybe Alex is the better player after all.3

Black decides to hole up with some chess books and study the position, while his children are out on dates. He explains to his wife what went wrong:

Steven: You see, Alex has been using the Nimzovich defence.

With white? What sort of Nimzovich defence is this? Usually that name is applied to 1.d4 Nc6, or perhaps you could argue that the Nimzo-Indian is the Nimzovich defence, but playing that is at least as much black’s choice as it is white’s. Maybe they mean the advance variation of the French?

Steven: But it’s easily countered with the Sicilian variation of the King’s gambit declined.

Okay, they just mean to blabber. Carry on, then. But don’t expect me to keep watching.

Realism: 0/5 Apart of the impossible bishop on a1, there’s also the very suspicious construction on white’s queen side, which seems to be the result of a misunderstanding of the castling rules.

Probable winner: White. He is over half an army up and his opponent is not likely to outlive him and thereby win on time.4

1. [I like to imagine the show started being about enormous ties which you can tie around the necks of the whole family at once.] ↩
2. [Chess ties.] ↩
3. [Admittedly, that might be damning him with faint praise.] ↩
4. [Unless the dad tries some pretty drastic measures. In that case, he might reappear in a future post.] ↩