Long, long time ago, when this blog was still in its infancy, Agatha Christie’s Poirot was a recurring guest. It’s been more than two years now since I wrote about him, but that does not mean that I have covered all the times chess appeared in the series. There is also today’s subject, for example. A young couple gets an unpleasant anonymous letter and, naturally, Poirot gets involved. While he is studying the letter, his involver is sitting in a comfy-looking chair at a chess table. No, not a chessboard, an honest to god chess table. Here it is: 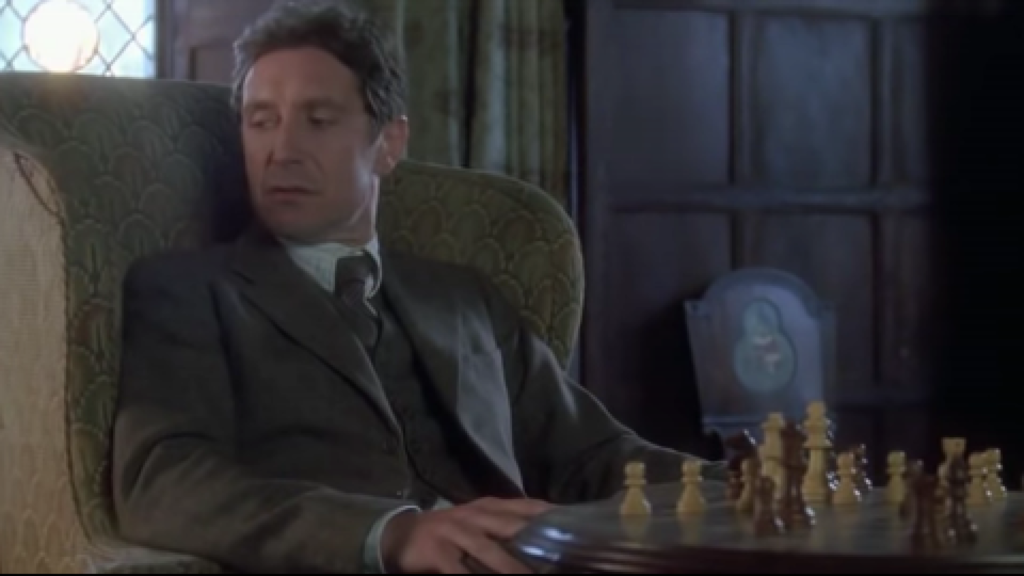 Very quickly, the enthusiasm for such a coveted item dwindles and altogether disappears. Seeing that there’s no raised rim to the board, it is very hard to see where it begins and ends. To make matters worse, Poirot’s little grey cells are otherwise engaged, so I will have to investigate this on my own.

My first idea was that the leftmost white pawn was not actually on the board, but just a taken piece standing on the sidelines of history. However, that would mean that the leftmost-but-one pawn, which is on a white square, must be on h2. Surely that cannot be!1 So the leftmost pawn must be on h2. From that observation we can build a narrow and very shaky path to a possible reconstruction.

Here and an embarrassingly uncertain attempt it is:2 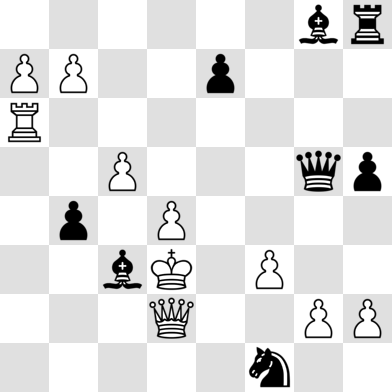 Yes, I know, it looks horrible. I admit that I might have gotten some pieces wrong, but there is definitely a weirdly centralised white king and there are certainly some black pieces far behind enemy lines. I definitely can’t see a black king.

After his perusal of the letter, Poirot says that the writer has been very careful indeed. That may be true for that letter, but not for the episode. They really dropped the ball on this little scene. I know I’m like a broken record about this, but how hard is it to look up an actual game and take a position from it? Even an idiot like myself can do it, goddammit!

Probable winner: Black, if he’s to move. Otherwise, it’s going to be a draw, simply because white can’t mate a king that isn’t there.

1. [Wonderfully jejune after more than two hundred blog posts, but I’m ever the optimist.]↩
2. [For diagram making needs, hereto go you need.]↩