Today we are delving deep in the archives of Belgian comics to bring to light one of the most obscure subjects yet for this blog: Timothey O. Wang. This character, a middle-aged Tibetan man with a fast car and superhuman powers, was a creation of Luc Warnent — who is now mainly known for his detective series Soda — and appeared for the first time in Robbedoes in 1981 under the names of Timotheus Octavius Wang. His first (untitled) adventure appeared in issues 2-4 of the 44th volume of the magazine. Near the end of the last instalment, the following scene appears:1 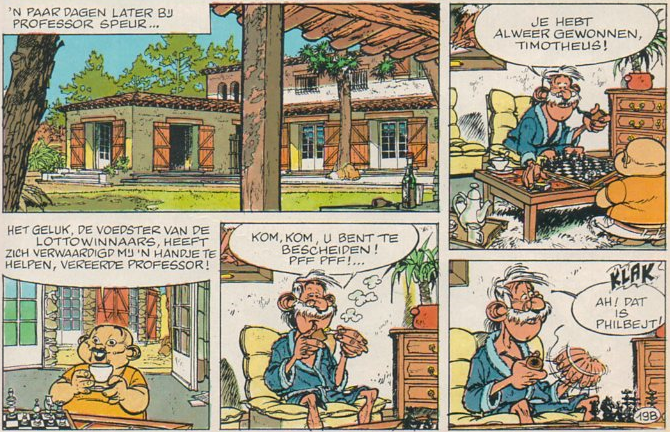 The similarity in drawing style to Franquin’s Spirou is immediately apparent, in particular when comparing the count van Rommelgem from that series with professor Speur above.

At this point, the professor’s dangerous invention has been recuperated with the help of his Eastern friend and the two have just finished a friendly game of chess. Here is a translation of the text for my international readers:2

Timotheus: Luck, nurse of the successful gamblers, has deigned to lend me a hand, honourable professor!

It does indeed look like white won. The drawing is quite small and the figures seem to be in the old regency style, but I am relatively confident in the following reconstruction:3 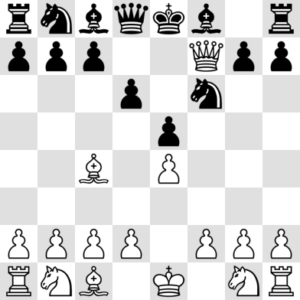 The only thing that is somewhat dubious is the position of black’s king’s knight on f6. In fact, I divined its presence there just as much from logical arguing as from the actual — and we all know how well our subjects tend to conform to logic.

Most likely, the game went something like this: 1. e4 e5 2. Bc4 d6 3. Qh5 Nf6 4. Qf7#. On the one hand, Timotheus’ claim about luck is somewhat justified as it’s hard to explain 3. … Nf6 as anything else than a fingerfehler. On the other hand, perhaps professor Speur has been smoking some mean pipes already and is, at this very moment, halfway to nirvana.

Realism: 4/5 I am sure that this exact position with the exact sequence mentioned above has appeared many times in actual games, but I have to dock a point because it is hard to accept that one of those games took place between two learned men.

Probable winner: White. It seems to be mate and both players agree. Easiest decision ever.

1. [This is a scan from the Dutch edition, as should be clear from the text.] ↩
2. [The translations are freely done by your servant. I have left out the Pff pff! and the Klak but kept the overabundance of exclamation marks. I have also corrected Philbejt to Philbert, which is the poor sod’s name throughout the rest of the story.] ↩
3. [If you have to make some diagrams as obscure as today’s subject, I recommend this site.] ↩