Who is the greatest detective from British fiction? Is it Sherlock Holmes? Perhaps Hercule Poirot or Mrs. Marple? Is it brother Cadfael? Do the famous five count? No, no, and thrice no! The greatest detective from British fiction is father Brown. The small, frumpy, brainchild of the great Chesterton figure in over three dozen well-written short stories with highly creative plots. The stories rightfully enjoy great popularity, but there are far fewer adaptations than for, say, Holmes. The reason is probably that Chesterton’s writing is a large part of the appeal of the father Brown stories, and this is hard to capture on film. Still, there were a few television series and a couple of movies. One of them, the German Das schwarze Schaf1 from 1960, is our subject of today. The story is a mishmash of bits and pieces from different stories, and the plot has suffered from that. Amongst others, there is a bishop now, who is rather annoyed by the good father’s antics. And who plays chess. 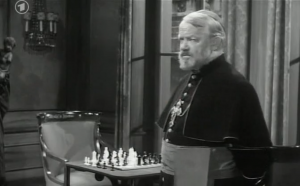 In the movie, a relatively big deal is made of the fact that Father Brown correctly deducing, from a few glances cast on the board while pacing the room, that his superior was playing black, but this can be shown much easier: he is standing diagonally next to the black player’s chair and he is a bishop.

The board remains half hidden in the background for the whole scene, so giving an accurate reconstruction is, as is so often the case, quite hard. In particular the queenside is constantly obscured by the bishop’s voluminous torso.2 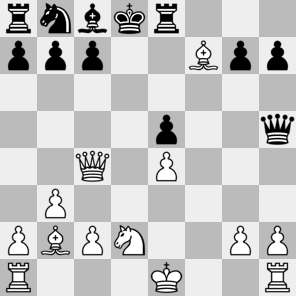 It is possible that I have overestimated the realism of the position in my reconstruction, but assuming I didn’t, it’s actually not so horrible. However, father Brown claims the bishop, who has black, has a winning move here. That seems less plausible than transubstantiation.

But maybe this is just a subtle revenge by father Brown. He probably knows that the bishop thinks him highly intelligent, if rather meddlesome, and perhaps he hopes that Monseigneur will be looking for a non-existent winning move. But that kind of behaviour by father Brown is highly non-canonical.

Realism: 3/5 This actually looks not completely stupid! All pieces are on logical places – excepting, perhaps, black’s queen – and there is even some evidence of coordination: with the bishop on b2, it makes sense to develop the queen’s knight to d2 instead of c3. Sure, black has been wasting some time, but especially beginners often do so.

Probable winner: White is a piece up and there’s another exchange waiting for him. The bishop is done for.

1. [Das schwarze Schaf is German for the black sheep and has the same idiomatic meaning. The ovine in question is supposed to be father Brown because, in this version of the story, he is like the bishop’s problem child.] ↩
1. [Do you find your diagrams obscured by episcopal torsos of extraordinary size? Just make a new one!] ↩